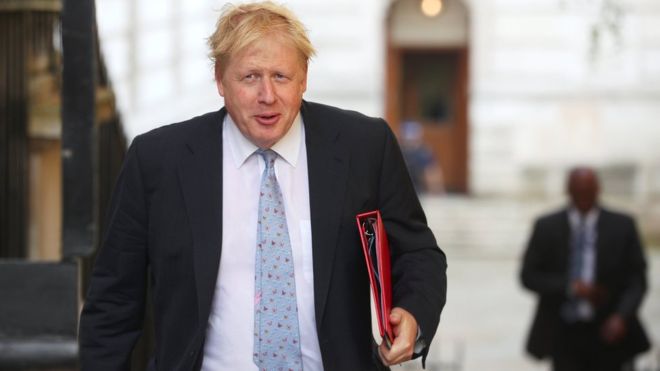 Boris Johnson has described one of No 10’s proposals for a post-Brexit customs arrangement as “crazy”.

A “customs partnership”, thought to be favoured by the PM, would involve the UK collecting import tariffs on behalf of the EU, Mr Johnson said.

In a Daily Mail interview, the foreign secretary said it would limit the UK’s ability to do post-Brexit trade deals.

No 10 said the idea was still on the table after ministers failed to agree a customs plan last week.

It also disputed the suggestion the UK would be collecting tariffs “on behalf of the EU” – saying that the money collected would stay in the UK although there would be an annual assessment of what the UK needed to pay the EU for tariffs collected on goods which had later moved on to the EU.

The newspaper quotes the foreign secretary as saying a customs partnership would create “a whole new web of bureaucracy”.

“If you have a new customs partnership, you have a crazy system whereby you end up collecting tariffs on behalf of the EU at the UK frontier,” he said.

If the EU decides to impose punitive tariffs on something the UK wants to bring in cheaply there’s nothing you can do.

His comments were made during a trip to the US and he said a trade deal with America could not be achieved if the UK remained “in the lunar pull of Brussels”.

He added that Americans wanted to see “a confident free-trading Britain able to do its own deals”.