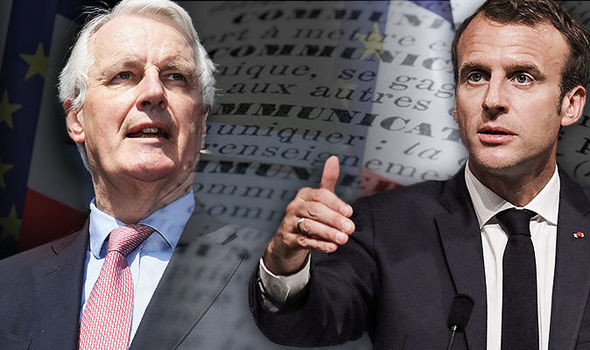 FRANCE is venting its frustrations at the rise of the English language around European Union institutions despite the United Kingdom’s decision to quit the bloc.

Francophones believed Brexit would herald a new dawn for the French language, which they said would reign supreme once again when Britain eventually leaves the EU.

However, the English language continues to go from strength-to-strength as the EU continues to push its expansion plans through Central and Eastern Europe.

Many of the newer countries diplomats spent their education studying English and not French, meaning the use of EU English – referred to as “Globish” – has become widespread across the bloc’s different institutions.

This has caused concern to the French-speaking EU officials who believed their language would make a dominate comeback.

Sylvie Guillaume, a French MEP, told Politico: “After Brexit, there’s a big temptation to make English the language of reference even more in the future.

“It worries me because I don’t really want use to end up speaking a language without subtlety on sensitive subjects.”

Last month, Paris’ EU Ambassador Philippe Leglise-Costa stormed out of a diplomatic meeting after the Council decided its new working group on the EU’s long-term budget should only use English and would offer no translations.

French President Emmanuel Macron said the French poet and writer of the Hunchback of Notre-Dame would be a “little disappointed” by the lack of dominance by the French language.

Mr Macron said Victor Huge “believed that French would be the language of Europe, would today perhaps be a little disappointed”.

The Commission’s chief negotiator Michel Barnier also proved his frustration at English being used after Brexit.

At the beginning of talks, he had demanded that negotiation be conducted in both French and English.

And then, at the March EU summit me refused to speak to the press in English while delivering his latest negotiation message.

Despite Brexit, the EU continues to bolster the English language as a key focus point in its future plans after the UK’s department.

In the bloc’s new Multiannual Finance Framework for 2021-27, the EU insists “translation services in the English language will also remain unaffected” by Brexit.

Leading EU figures continue to show the importance of the English langue in their recent public appearances.

Council President Donald Tusk delivers his speeches in English as the former Polish prime minister can only speak his mother tongue and German as well.