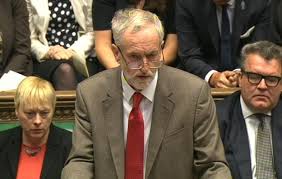 “How can they negotiate in the interests of people’s living standards when Cabinet members are more interested in putting their own futures first?”

Jeremy Corbyn tore into Theresa May’s shambolic plan for a Brexit customs union – which was branded “crazy” by her own Foreign Secretary Boris Johnson this week.

Speaking at Prime Minister’s Questions, the Labour leader asked Mrs May whether she agreed with Johnson – poking the ever widening splits on her front bench.

But Mrs May insisted what was ‘crazy’ is that after years of opposing the Transatlantic Trade and Investment Partnership (TTIP), he now finds himself wanting to sign up for a deal that would keep Britain inside the deal.

Corbyn pressed her to explain why she and her cabinet “wasted weeks planning up proposals that the EU said was unworkable”, and were described as a “fantasy unicorn plan” by former ambassador to the EU Ivan Rogers.

Mr Speaker, she presides over a divided cabinet, she’s had 23 months in order to negotiate an agreement and hasn’t made any progress on it. The [Confederation of British Industry] says a comprehensive customs union after transition is a practical, real world answer. The TUC on behalf of six million workers in this country put it simply – ‘ruling out a customs union risks jobs.’

“The government continues to reject a new customs union, but at the weekend the Business Secretary [Greg Clark] made clear that neither of their options will be ready to be implemented by 2020.”

He challenged the Prime Minister to reveal what her preferred option was – and on what date it would be ready.

Mrs May said “questions had been raised” about the two options she outlined in her Mansion House speech – “and further work continues.”

She added: “We are leaving the customs union, what we are doing is ensuring that we deliver customs arrangements that ensure there is no hard border between Northern Ireland and Ireland, as frictionless trade with the EU as possible, and an independent trade policy. But what would Labour give us?

“They want to go into a customs union with the European Union with no say over trade policy, with Brussels negotiating trade deals in their interests, not our own. The Labour manifesto said it wanted to strike trade deals, now they’ve gone back on that policy. Typical labour, letting Britain down once again.”

Later, SNP Westminster leader Ian Blackford took another shot at Boris Johnson, both for his Brexit outburst and for appearing on Fox News in a vain attempt to plead with Donald Trump not to pull out of the Iran Nuclear Deal.

He said: “Pleading with the President through Fox News rather than direct intervention. The Middle East is in need of stability, conflicts are raging in Yemen, Syria and Iraq. Meanwhile the Foreign Secretary cannot deliver a message abroad in the correct manner, whist at home the Foreign Secretary undermines the Prime Minister on the customs union.

“Prime Minister, can you tell us when the Foreign Secretary will agree with the government’s position and if not will she have the backbone to send him to the back benches?”