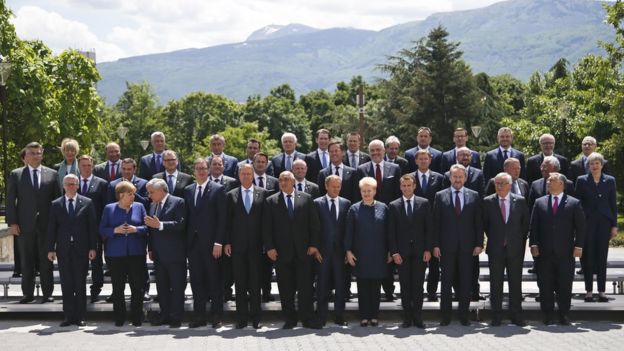 Irish Prime Minister Leo Varadkar has said he will tell Theresa May that it is “an absolute red line” that there is no hard Irish border after Brexit.

The taoiseach will meet prime minister Mrs May on Thursday on the margins of an EU-Western Balkans summit.

The meeting, in the Bulgarian capital, Sofia, comes amid growing tension over the slow progress of Brexit negotiations.

Mr Varadkar said he was “really looking forward” to meeting with Mrs May.

It will be the British and Irish prime ministers’ first meeting in months.

However Mr Varadkar said that there has been regular contact between the two governments on official and ministerial level in the past few weeks.

“What I’ll be saying is that the Irish position hasn’t changed,” he said.

“We have a text, that’s the Irish backstop, which all EU27 countries stand by, and that was published in March.

Entering the summit, Mrs May said: “The United Kingdom will be leaving the Customs Union, as we’re leaving the European Union.

“We need to be able to have our own independent trade policy, we want a frictionless border between the UK and EU so that trade can continue and we want to ensure that there’s no hard border between Northern Ireland and Ireland.”

Dublin and the EU have expressed frustration over the slow progress on the UK agreeing to legally operable language on the Irish “backstop” solution.

At the end of last month, EU’s chief Brexit negotiator Michel Barnier said there could be no Brexit withdrawal agreement without the backstop option for the Irish border.

Mr Barnier said the Republic of Ireland has the full support of all EU member states and all EU institutions.

It has been reported that the British government is considering telling Brussels it will stay tied to the Customs Union beyond 2021, partly in an attempt to avoid a hard border in Ireland.

The idea would be during that period when the UK would remain aligned with the Customs Union that the UK could start negotiating trade deals but not actually implementing them.

Of course from a Brexiteer perspective that is taking away what was one of their main objectives in pushing for Brexit in the first place.

From the other side, from the Irish and the EU, they will be looking closely at this and saying the backstop did not necessarily refer to a time limit it was meant to be a temporary measure and they will be wondering whether aligning with the Customs Union, which would align tariffs for a period of time is enough.

This is a notably different reading of the backstop from the one the EU initially pushed’ where they were essentially hiving off Northern Ireland and treating Northern Ireland as the customs territory of the EU.

The backstop would involve Northern Ireland, or the UK as a whole, aligning with the EU rules required to support north-south cooperation and an all-island economy.

The UK has accepted the need for a backstop to be written into the Brexit withdrawal agreement, but it has not agreed what EU rules it should cover.