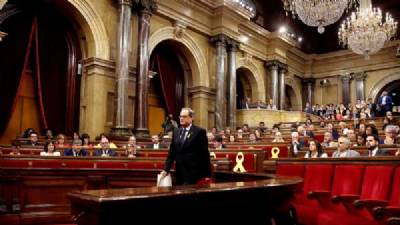 SPAIN’S government has opted not to lift Article 155 of the Constitution giving Catalunya back its self-governing powers, removed from the region following the disputed independence referendum.

It considers new regional president Quim Torra (pictured) to be acting in a ‘provocative’ manner after he released his list of newly-nominated ministers, which included two Catalunya politicians in jail for their referendum role and two in exile in Belgium to avoid arrest.

Normally, the appointing of a new president would be published in the region’s Official Daily Bulletin by the government of that region, although Spain’s government has the job of doing so in the case of Catalunya, which has no jurisdiction over its own ruling.

But Spanish president Mariano Rajoy has said he does not intend to make this publication – a decision which clearly shows Article 155 remains in place and will not be lifted.

Rajoy says his cabinet will ‘analyse the viability’ of Catalunya’s new government, which even hints Quim Torra could be left without governing powers and end up as president in name only.

“[Torra] has wasted an opportunity to demonstrate a willingness on Catalunya’s part to return to legality and normality [by giving up the independence movement] since his decisions show that he wishes to maintain a strategy of confrontation with the State and with the majority of Catalunya’s society,” the official communication from the Moncloa, or Rajoy’s official presidential residence, reads.

A letter to this effect has been sent to Catalunya.

Torra named Jordi Turull as regional minister for presidency and Josep Rull as minister for territory and sustainability – both of whom have been in police custody since October.

He named Antoni Comín as minister for health and Lluís Puig as minister for culture, both of whom remain in exile in Belgium, where they fled with then president Carles Puigdemont and ministers Clara Ponsatí and Meritxell Serret.

Dr Ponsatí is now in Edinburgh, having gone back to her previous job teaching economics at St Andrew’s University, and has the overwhelming backing of the Scottish public and Parliament in the face of Spain’s extradition order.

Sra Serret is still in Belgium with Puig and Comín, and Puigdemont is in Germany, unable to leave the country after an international arrest warrant from Spain led to his being detained near the Danish border whilst driving home to Belgium from a conference at Helsinki University.

Two other Catalunya politicians remain in prison, and the CUP’s Anna Gabriel is in exile in Switzerland.

Torra cannot publish the names of his ministers without the national government’s consent, due to Article 155.

If he does so, attempting to make their appointments official without the State’s permission, they will be declared null and void.