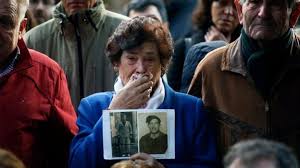 The remains of 22 people killed in the months following Spain’s 1936-39 civil war were handed over to relatives in a ceremony in Guadalajara on Saturday after investigations into a suspected mass grave unearthed the victims.

Hundreds took part in the handover following an exhumation at a cemetery thought to contain as many as 800 victims of political violence during the almost four-decade dictatorship of General Francisco Franco that followed the war.

The ceremony, in which the remains were handed to families in simple wooden boxes covered by a red velvet cloth and topped with a white carnation and a photo of the deceased, was a solemn event that also helped draw a line under years of uncertainty.

“This has brought us a sense of calm. We feel better because, at the end of the day, although they’re longer alive, we have their bodies which are ours and which we have the right to have where we want and where they should be, in their own town,” said Maria Angeles Ortega Gonzalo, after receiving the remains of Casto Mercado Molada, her brother-in-law’s grandfather.

Her own grandfather, also known to be amongst those at the site, has yet to be identified, she said.

The families planned to give their loved ones a proper burial at cemeteries across the area later on Saturday.

The resting place of many killed across the country are still unknown, though the Association for the Recovery of Historical Memory (ARMH) has documented 114,226 cases of men and women buried in mass graves around Spain.

In an effort to ease the transition to democracy in 1977 after Franco’s death, Spain passed an amnesty law pardoning political crimes committed during the conflict and the dictatorship in an accord known as the “Pact of Forgetting”.

Since then, some have fought to unearth family members who were killed and dumped in unmarked mass graves. The Guadalajara site was opened on the orders of an Argentine judge in a lawsuit seeking redress for crimes committed during the war and the years that followed.

Historians estimate about half a million combatants and civilians were killed on the Republican and Nationalist sides in the war, while tens of thousands of Franco’s enemies were later killed or imprisoned in a campaign to wipe out dissent.