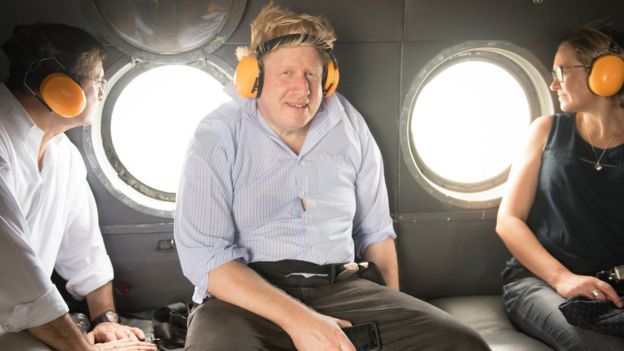 A “backstop” plan to keep the UK aligned with the EU’s customs union after 2020 would only apply “in a very limited set of circumstances”, Theresa May has said.

The proposal was drawn up to avoid a hard border in Northern Ireland if the UK and EU cannot agree new arrangements in time.

He said Mrs May would be “true to her promises” and deliver a deal.

The UK is leaving the EU in March 2019, which will be followed by a temporary transition phase until the end of 2020.

But ministers have yet to agree what they want to replace the UK’s membership of the EU’s customs union, which allows for tariff-free trading between members.

With no decision reached between the two alternative proposals the UK is considering, senior ministers signed off on a third, temporary, “backstop” option – which government sources say is very unlikely to be needed – at a meeting last week.

It would see the UK match EU tariffs in order to avoid border checks.

The government says this would allow the UK to sign and implement its own trade deals, something which it cannot do in the customs union.

But some Brexiteers who want a clean break from the EU fear it could turn into a long-term arrangement – last week backbench MP Jacob Rees-Mogg warned that people did not vote for a “perpetual purgatory”.

Speaking in Macclesfield, Mrs May said the EU’s own “backstop” – keeping Northern Ireland in the customs union – had been unacceptable so the UK had drawn up an alternative.

“Nobody wants this to be the solution that is achieved,” she said.

“If it’s necessary it will be in a very limited set of circumstances for a limited time.”

The prime minister said she wanted to solve the customs issue “through our overall relationship with the European Union”.

Earlier, speaking to reporters during a tour of Latin America, Mr Johnson – who led the campaign to leave the EU in 2016 – said: “Brexiteers fearing betrayal over the customs backstop must understand that the PM has been very clear that neither option is an outcome we desire – we want a deal with the EU and she will deliver it.

“I’m convinced that the prime minister will be true to her promises of a Brexit deal that sees Britain come out of the customs union and single market, have borders as frictionless as possible, reject European Court of Justice interference, control immigration and free to conduct unhindered free trade deals across the world.

“We must now give the prime minister time and space to negotiate this Brexit vision.”

One of Mr Johnson’s fellow Brexit campaigners, Environment Secretary Michael Gove, said the “whole point” of the backstop arrangement was “that it’s intended not to be implemented but is there just in case”.

The “strictly time-limited” arrangement would ensure a free flow of goods across the Irish border if the UK and EU cannot agree alternative arrangements, he said.

Democratic Unionist Party leader Arlene Foster said there had to be clarity about how long any such arrangement would last, telling an event in London “there has to be a backstop to the backstop”.

None of the UK’s customs proposals have been agreed with the EU yet.

Most Brexiteers are against Mrs May’s preferred option of a “customs partnership”, under which the UK would collect tariffs set by the EU customs union on goods coming into the UK.

If the goods subsequently ended up in the EU the UK would pass the collected tariffs on to the EU. If the goods stayed in the UK, firms would be able to claim back the difference if the UK tariff on those goods was lower.

The alternative proposal would rely on technology and advance checks to minimise, rather than remove, customs checks. The EU has expressed doubts about whether either option would work.

Mr Johnson’s five-day visit, taking in Peru, Argentina and Chile, is designed to pave the way for post-Brexit deals.

“Already during my time in South America I’ve been bowled over by the optimism and excitement from nations keen to forge deeper ties and new trading relationships with the UK,” he said.