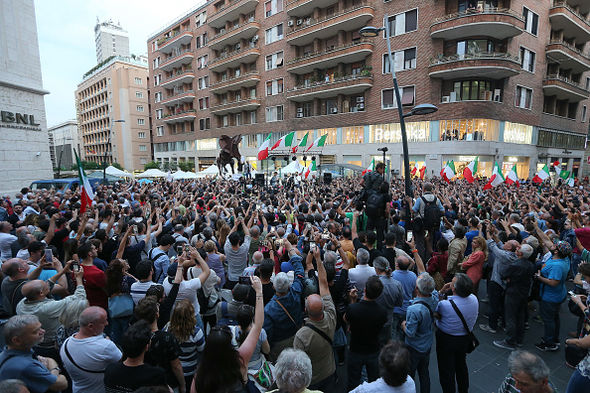 BREXITEERS fear Italy’s battle over the euro could make it harder for Britain to scoop a decent trade deal after leaving the EU.

Pro-Brexit ministers are concerned that EU chiefs’ focus on the struggling Mediterranean nation’s political crisis will distract them from crunch negotiations at the upcoming EU summit.

EU sources also warned last night that Italy’s crisis will “tighten resolve” among member states not to give ground to Brexit.

An EU diplomat said: “The UK is filling baskets with cherries, Poland wants pears, Hungary apples and Italy empties the orchard and is taking the trees

If you ask me whether the EU will double down on cherry-picking my answer would be that it must.”

EU chief negotiator Michael Barnier warned Brexit will be nothing but a “footnote” at the June 28 meeting, which will focus instead on Italy and US trade tariffs.

The Italians are wrestling with their constitution after a hung parliament saw the anti-establishment Five Star Movement, right-wing Lega and Matteo Renzi’s Democratic Party win an outright majority of the votes.

For three months then country had no government until Lega and the Five Star Movement recently began growing in prominence.

Both are eurosceptic parties meaning the country could leave the euro and return to the lira, which would be catastrophic for the bloc and Italy should their own currency crash.

Prime Minister Giuseppe Conte was put in charge to head the coalition government in Italy, which is the Eurozone’s fourth-biggest economy.

Jean-Claude Juncker risked infuriating Italy after insisting the country take the blame for its economic woes.

The EU president said: “I’m no longer accepting that everything which is going wrong in the south of Italy is explained by the fact that the EU or the Commission would not do enough.

“Italians have to take care of the poor regions of Italy, that means more work, less corruption, seriousness.”

He added: “We will help them as we always did but don’t play this game consisting and loading with irresponsibility the EU. A country is a country, a nation is a nation. Nations first, Europe second.”

They also believe EU leaders are less likely to bow down to Britain’s demands while Italy tries to stay afloat because it could goad the country into taking on Brussels too.

A senior Whitehall figure told The Sun: “The more the 27 think that the Brits are exploiting the eurozone’s troubles, the more the wagons will circle.

“They will go into defensive crouch mode again, and we need them to be feeling generous.”