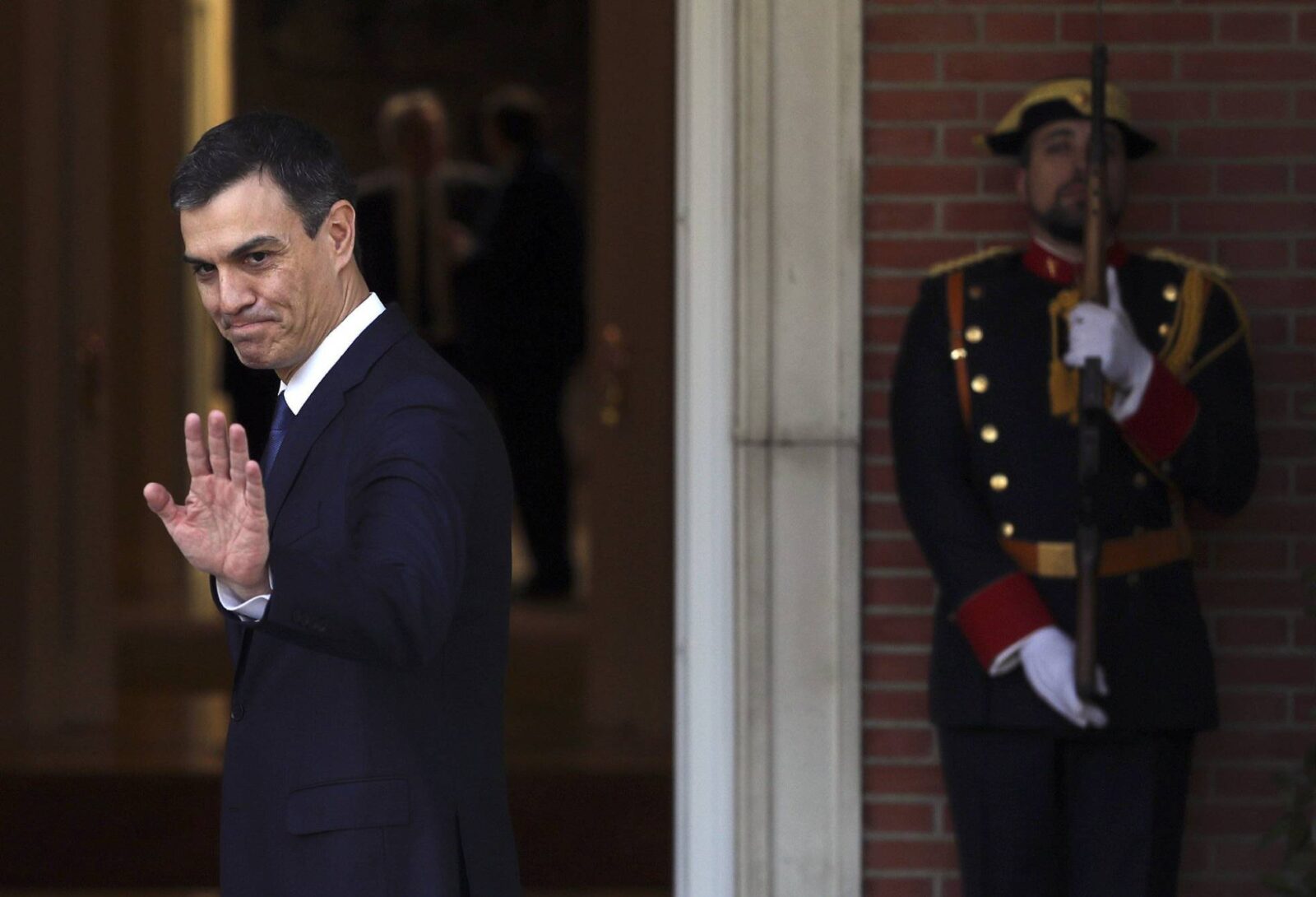 Sánchez’s choices send out a strong message about his position on high-profile issues such as Catalan separatism and gender equality.

It looks like Sánchez going to choose a weaker government

The new leader’s lineup makes no concessions to the parties who supported Rajoy’s ouster, with all top positions reserved for Socialist Party (PSOE) members or individuals with close ties to it.

Opponents of the no-confidence motion have claimed that Sánchez will head a “Frankenstein government” made up of numerous parties with incompatible interests, including the anti-austerity Podemos as well as Basque and Catalan nationalists.

Podemos had wanted to see some of its members in government positions. “The Sánchez government would be a lot more solid with Podemos members in it,” said spokeswoman Noelia Vera on Monday. “But it looks like he’s going to choose a weaker government.”

The PSOE has 84 seats in the 350-seat lower house, meaning that it will need support to get legislation passed. A joint PSOE-Podemos administration would represent 156 seats. An absolute majority is 176 seats.

One of Sánchez’s key appointments is Josep Borrell, a party veteran who will hold the foreign affairs portfolio. Borrell, 71, served as a minister in the 1990s under Felipe González, and he was president of the European Parliament from 2004 to 2007.

Borrell, who is Catalan, has also been an active campaigner against the ongoing secession drive in the northeastern Spanish region. He has appeared in international media outlets and published material defending the right of non-separatist Catalans like himself to feel both Catalan and Spanish without feeling discriminated against.

During the last election campaign in Catalonia, Borrell made controversial statements about the social fracture caused by the secession drive. “This Christmas, there will be families who will not eat their turrón together, and who will throw their cava glasses at each other’s heads,” he said, in reference to a popular nougat usually eaten during the holidays and Catalan sparkling wine.

His appointment sends out a message to Catalan nationalists, but also to the Popular Party (PP) and Ciudadanos, who have suggested that Sánchez may have reached secret deals with separatists in order to secure their support for the no-confidence vote in Congress on Friday.

In Catalan separatist circles, news of Borrell’s appointment did not go down well. He was described as someone “from another era” who has contributed to “the escalation of hate” by Carles Puigdemont, the former Catalan premier who was removed by Madrid after leading a unilateral independence drive last year and is now in Germany fighting extradition to Spain on rebellion charges.

“Is this the gesture they had in mind to send us a fraternal message of de-escalation?” tweeted Puigdemont, who also scoffed at the moderate sectors in Catalonia who welcomed news of a Socialist administration in Madrid, calling them “apologists, smug and pompous.”

Another high-profile pick is Carmen Calvo, who will simultaneously be his deputy PM and the head of the newly restored Equality Ministry, which was originally created by the Zapatero administration in 2008, then downsized to a Health Ministry department in 2010, at the height of the economic crisis.

It had been widely expected that Sánchez would seek a higher profile for equality issues on a year when women’s rights have risen to the top of the public agenda. Spain held a widely followed “feminist strike” on March 8, Women’s Day, and the ruling in a recent gang-rape trial triggered nationwide protests over the treatment of rape victims by the law.

Calvo, 60, has prior ministerial experience under José Luis Rodríguez Zapatero and she served as deputy speaker in Congress, which gives her insights into the workings of both the executive and legislative branches of government. As an expert in constitutional law, last year Calvo was tasked with negotiating the scope of Article 155 – the part of the Constitution used to temporarily suspend autonomous powers in Catalonia – with the Popular Party.

Several women will hold other key portfolios: environment will go to Teresa Ribera, who was director of the Spanish Office for Climate Change between 2004 and 2011. The treasury department goes to María Jesús Montero, who worked in hospital management before heading the Andalusian treasury department under regional premier Susana Díaz. And public administration will be under the guidance of Meritxell Batet, a law graduate who has taught administrative and constitutional law.

The public works ministry will be headed by José Luis Ábalos, the PSOE’s organization secretary.

The new ministers are expected to take up their posts on Thursday and hold the first Cabinet meeting on Friday.

In the meantime, Sánchez’s own agenda has been packed since Monday, when he met with the president of Ukraine. Petró Poroshenko, in Madrid. And the first minister of Gibraltar, Fabian Picardo, has already sent Sánchez a letter reminding him of the delicate situation created by Brexit for the British overseas territory, and urging him to start talks over the issue.