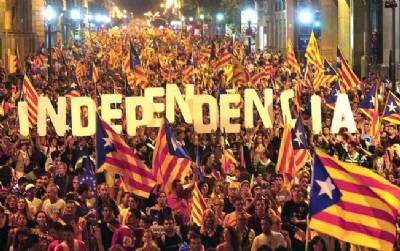 PEDRO Sánchez’s government has agreed to withdraw its control over Catalunya’s finances as an olive branch towards the politically turbulent region and to ‘normalise relations’ between the north-eastern territory and the rest of Spain.

In contrast to the former right-wing PP government’s approach, considered by many to be autocratic, rigid, closed and rule-book loving, the centre-left PSOE, or socialists have agreed to ‘dialogue’ as Catalunya’s deposed leaders have been calling for since long before the disputed independence referendum on October 1.

Sánchez will start a tour of Spain, meeting with the leaders of each of its autonomously-governed regions, including new Catalunya president Quim Torra.

He says he will approach the subject ‘with the Spanish Constitution in one hand and open dialogue in the other’.

His predecessor Mariano Rajoy has always said it was ‘open to dialogue’, but ‘not about anything illegal’, as it considers Catalunya’s separatist bid, meaning by default such dialogue could never take place.

Isabel Celaá, education minister, announced that orders had been given to all banks operating in Catalunya to attend to payment orders placed by the regional government without referring them to the national tax authority for approval first.

But she warned that the central government would be the first to know if any public funds were destined towards further independence moves.

The new government will also arrange meetings with various Parliamentary leaders and ‘social agents’, such as the health service and education community.

Sra Celaá said the new government had ‘hit the ground running’, that there was ‘no time to stop for a break’ because they had ‘plenty of work to do’ and were ‘raring to go’.

As yet, details of the new cabinet’s plans are not set in stone, but Celaá has asked for patience and understanding as they are only a week into their roles, but says their intentions are the right ones.

These intentions include getting back the clout Spain historically had in the European Union, dialogue with all political forces, ‘soothing’ the ‘pent-up anger’ that ‘some people’ in Parliament felt, redressing the ‘sacrifices’ the people of Spain had made during the economic crisis, and restoring, regenerating and modernising Spain.

This week, Sánchez sent a memo to all his new ministers asking them to govern with ‘agile proposals’ and dialogue ‘without exceptions’.