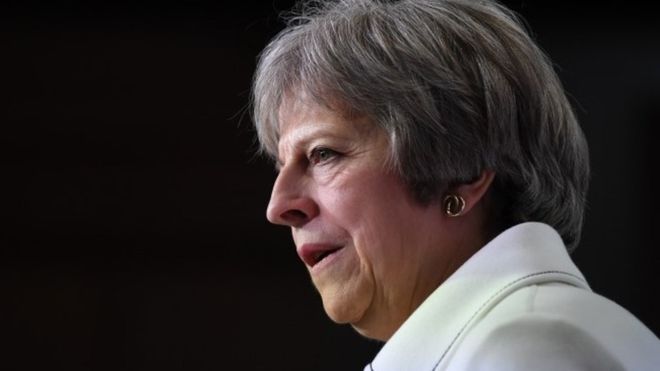 Theresa May is expected to urge potential Tory backbench rebels to unite behind the party ahead of crucial votes on the EU Withdrawal Bill.

She wants to overturn a series of amendments made by the Lords, but faces possible defeat if Conservative Remainers side with Labour.

Rebel MPs have suggested they have sufficient numbers to threaten the government and want more concessions.

Mrs May is expected to tell MPs it is their duty “to deliver on Brexit”.

“We must be clear that we are united as a party in our determination to deliver on the decision made by the British people,” she is expected to tell the backbench 1922 Committee.

“They want us to deliver on Brexit and build a brighter future for Britain as we take back control of our money, our laws and our borders.”

A big week for Brexit

After Mrs May has addressed her MPs on Monday evening, there will be two days of votes on the EU Withdrawal Bill on Tuesday and Wednesday.

The bill is the key legislation the government needs to pass to make its Brexit strategy work.

But the House of Lords has put forward changes to it which would require a different approach in some key areas.

This week the government wants to kill off most of these changes – but numbers in the House of Commons are finely balanced, with the Conservatives needing the help of Northern Ireland’s Democratic Unionist Party to get a majority.

The two amendments set to be most tricky for the government are one on Tuesday, which gives Parliament a decisive vote over the final Brexit deal, and another on Wednesday which instructs Mrs May to negotiate a customs union with the EU.

Conservative MP Sarah Wollaston told BBC Radio 4’s Today programme she was “minded” to vote against the government on the first of these, which calls for Parliament to get a “meaningful vote” on any final deal struck between the UK and EU.

She also called for “further concessions” from the government on the customs union amendment.

Speaking on LBC, Mr Rees-Mogg, who chairs the pro-Brexit European Research Group of Tory MPs, predicted “there will be unity, it won’t be perfect” but that it would be “enough to get the bill through”.

The key dates ahead on Brexit

What is the EU Withdrawal Bill?

It is the legislation aimed at ensuring the UK has a smooth transition out of the EU.

It will repeal the European Communities Act, which took Britain into what was then the European Economic Community, meaning EU law is no longer supreme in the UK.

And to avoid a sudden “cliff edge” on Brexit day, 29 March 2019, it would also convert existing EU law into UK law so the government and Parliament can decide at a later date which bits they want to keep or change.

The bill has also become of the focus of several attempts by MPs and peers to change parts of the government’s approach to Brexit.

To rebel or not rebel?

Writing in the Daily Telegraph, Cabinet Office Minister David Lidington set out the government’s plea to potential rebels, saying the House of Lords had tried to damage the Brexit process by changing the EU bill.

The purpose of the bill is to ensure “legal certainty” around Brexit, and it is “profoundly in our national interest” that MPs do not “allow hostile amendments to frustrate those essential aims” he said.

“This week, I hope that MPs from all parties, including those Labour MPs who want to see their constituents’ votes in the referendum acted upon, will give the prime minister their backing,” he added.

His comments follow the claim from two senior Conservatives, Remainer Amber Rudd and Brexiteer Iain Duncan Smith, that any rebellion will only play into the Labour leader’s hands.

Some pro-EU Tories were reported to be backing away from voting against government, over fears that a defeat could prompt a leadership contest and see Mrs May replaced by a far more hard-line Brexiteer.

Others, such as veteran Conservative MP Ken Clarke, however, have said the prime minister is being “undermined” by her ministers and needs to be “rescued”.

Labour are urging Tory rebels to side with them in the Commons on Tuesday and Wednesday with Labour’s Sir Keir Starmer saying Tory rebels had a “real chance to change the course of the Brexit negotiations”.

But Jeremy Corbyn’s party is also divided on Brexit, with pro-EU campaigners urging him to shift policy to support staying part of the EU’s single market like Norway, which is the subject of another of the Lords amendments.

Separately, Mr Davis is due in Brussels on Monday morning for the latest round of negotiations with his EU counterpart Michael Barnier.