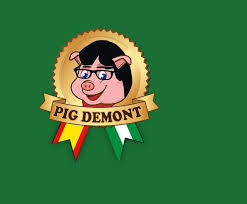 Former Catalan separatist leader Carles Puigdemont has asked Spanish authorities to stop the sale of a brand of dry-cured ham called “Pig Demont” whose logo is a pig with a hairstyle and glasses similar to his.

The request is being studied by Spain’s patent office which has temporarily suspended the “jamon” brand from being officially registered while it considers the arguments in the case, a spokesman for the office told AFP on Thursday.

The case began in December when a businessman from the southwestern region of Andalucia, Alberto Gonzalez, renamed his dry-cured ham company with the contested name and logo.

The name change received widespread attention after he gave an interview on Wednesday to conservative radio COPE.

Gonzalez told the station that the name of his company comes from the union of the word “Pig” in English and “du mont” in French which means “from the mountain”, and denied the logo was inspired by Puigdemont’s shaggy Beatles-style mop and glasses.

“He does not have the (intellectual) property over that hair cut, the logo does not reflect his appearance,” he said.

“If he sees himself reflected in the caricature of a pig that is more his problem then mine.”

Puigdemont’s lawyer, Jaume Alonso Cuevillas, told Catalan television TV3 he had challenged the attempt to register the brand “Pig Demont” because it is “offensive” and is “phonetically similar to a surname that (Gonzalez) is not authorised to use”.

Aside from the ham, Gonzalez’s company also sells a wine called “Rufian”, which shares the surname of Gabriel Rufian, a member of Spain’s parliament for the pro-independence party ERC.

Puigdemont, who fled to Belgium last October, was detained in Germany in March after Spain issued a European arrest warrant against him.

Madrid wants to extradite him to Spain to try him on charges of rebellion and misuse of public funds for staging an independence referendum in Catalonia in October even though the courts had ruled it unconstitutional.