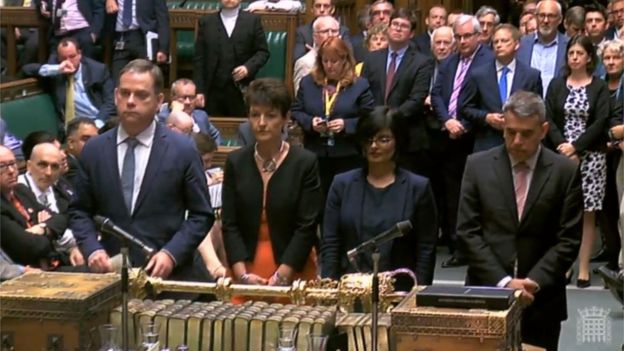 The government’s bid to avoid a Commons defeat on the Brexit bill has been rejected as “slap in the face” by leading rebel Dominic Grieve.

Theresa May assured Mr Grieve ahead of a vote on Tuesday that his call for MPs to be given a greater say on a Brexit deal would be taken on board.

But he said ministers had changed the wording of an amendment drawn up after talks with him, at the last minute.

Further talks are expected ahead of the bill returning to Parliament next week.

Solicitor General Robert Buckland said the government had to “strike a balance” between rebels’ concerns and protecting the government’s negotiating position in Brexit talks with the EU.

BBC political editor Laura Kuenssberg said Remain-leaning Tory MPs were furious and it set the scene for another big showdown when the bill returns to Parliament.

Why are Brexit rebels upset?

Mr Grieve, a former attorney general, told BBC One’s Question Time he could not understand why the government amendment to the EU Withdrawal Bill had been changed “at the last minute” after two days of talks.

“I’d actually got on a train. I thought it was all over,” he said.

He said the problem was that if the UK reached “the really apocalyptic moment” where no Brexit deal had been done by early February 2019, Parliament was not being offered the chance to say what should happen next – only to “note” the position.

Later he told BBC Radio 4’s The World Tonight: “I simply don’t understand why they have done this … It does feel, I have to say, to be blunt about it, it seems a bit like a slap in the face.”

He added that rebels would “talk further to the government and try to resolve it”.

Fellow backbencher Sarah Wollaston described the change as “a sneaky sting in the tail” while Anna Soubry described it as a “big mistake by the prime minister” adding: “Unfortunately it looks like she’s yet again caved into the hard Brexiteers.”

Another pro-EU Tory MP, Stephen Hammond, suggested the amendment had been “hijacked” by government figures trying to “force their will” onto the process.

What does the government say?

Asked if ministers had caved into the demands of Brexiteers and changed the wording, Solicitor General Robert Buckland said: “No, I’m not getting into some Tory psychodrama about this.

“Colleagues had their say and had an input into the process. No deals were done this was all a process that took several hours, to say the least, to try to produce something that could command support and I’m sorry that some colleagues feel that it doesn’t go as far as they had hoped for, I really am.

“But we have to make a decision, we have to move forward, table an amendment and allow their lordships to have the vigorous debate that I’m sure will follow next week.”

A spokesman for the Department for Exiting the European Union said the amendment addressed a “hypothetical” scenario adding: “The government is confident we will agree a good deal with the EU which Parliament will support.”

The bill will now returns to the House of Lords early next week, with both the government amendment and Mr Grieve’s original amendment expected to be debated. It will then return to the Commons, where a fresh showdown is expected unless a deal is hammered out.

Mr Grieve had originally wanted the amendment to say that the government must seek the approval of Parliament for its course of action – and that ministers must be directed by MPs and peers.

What does Labour say?

“Theresa May has gone back on her word and offered an amendment that takes the meaning out of the meaningful vote. Parliament cannot – and should not – accept it.”

Why Brexiteers are so enraged

Former Attorney General Dominic Grieve, Anna Soubry and perhaps a dozen of their Conservative backbench colleagues are leading the fight to ensure the Commons has the chance to shape the government’s next move, if no deal is reached with the EU.

That is Labour’s view too.

But the government is emphatic Parliament should not have that power. Why?

Because that would effectively neuter the UK government’s threat to the EU, that it is prepared to walk out without a deal.

That’s why Brexiteers are so enraged by this row. And it’s why Dominic Grieve and his parliamentary posse are steeled for a drawn-out fight with their own government.

The argument moves back to the Lords on Monday before a likely final showdown in the Commons next Wednesday.

A compromise may be brokered before then. But a Conservative source told me the bitterness within the party was now worse than it was during the Maastricht saga in the early 1990s – of which today’s battle over Brexit is, perhaps, the final act.

The background to the current row

The UK is due to leave the EU in March 2019, and negotiations have been taking place on the terms of the separation and how the two sides will work together in the future.

The government is trying to pass a new law, called the EU Withdrawal Bill, which it says is needed to ensure a “smooth and orderly Brexit”.

Its main purposes are to end the supremacy of EU law in the UK, and transfer existing EU law into UK law so the same rules and regulations apply on the day after Brexit.

Mr Grieve summed up the suspicion on both sides of the Brexit argument: “One background fear is that actually there are some people who would quite like to just tip the UK out of the EU with no deal at all … the other one is that people are trying to stop Brexit happening.”