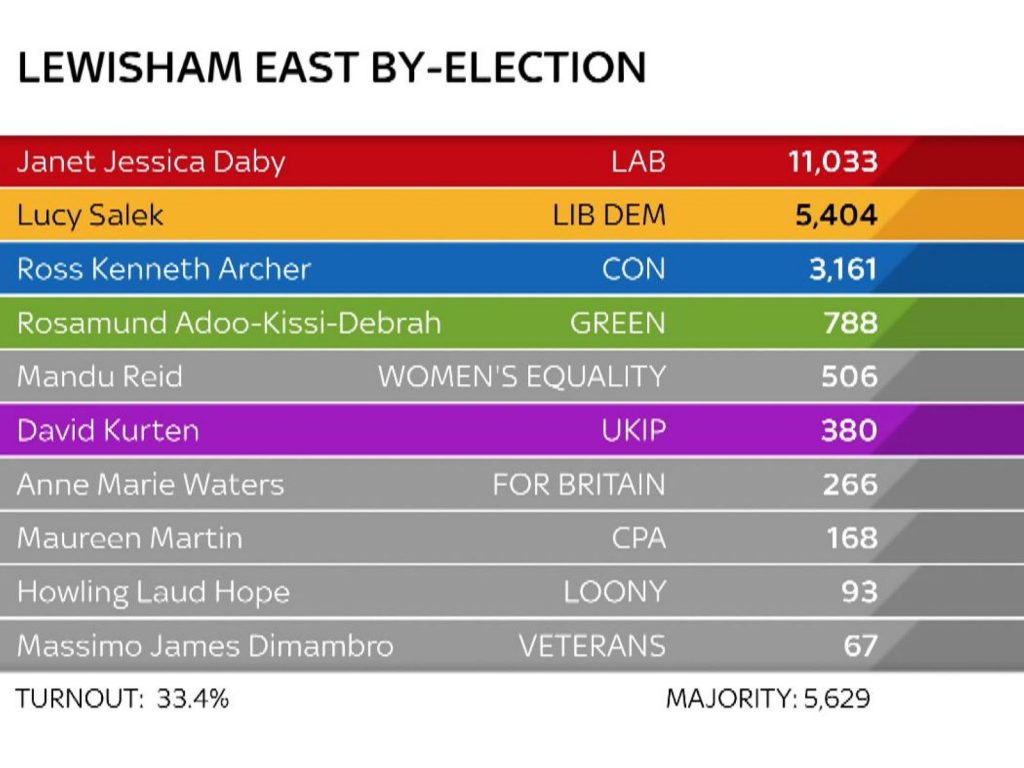 Janet Daby holds the Labour seat with a majority of 5,629, well below the 21,213 Heidi Alexander achieved at the general election.

Labour has comfortably won the Lewisham East by-election, but the Liberal Democrats have pushed the Conservatives into third place in what looked like a Brexit backlash.

Janet Daby became Labour’s newest MP with a majority of 5,629, well down on the party’s 21,213 winning margin in last year’s general election, but on a greatly reduced turnout.

A strong Remain supporter, Ms Daby declared in her victory speech: “We will not tolerate an extreme Brexit in Lewisham East.”

As well as a reduced majority, Labour’s share of the vote, around 50%, was well down on the 68% polled by Ms Daby’s predecessor, Heidi Alexander, in the general election.

Also celebrating were the Liberal Democrats, who leapfrogged the Tories to take second place with 14% in a seat where they polled just 4.4% in the general election.

But a Brexit backlash against the Tories was always possible in a seat that voted nearly 70% for Remain in the European Union referendum in 2016.

The result put the Lib Dems up more than 20%, with a swing of nearly 19% from Labour to Lib Dems.

The victory by Ms Daby, who was briefly deputy mayor of Lewisham until becoming Labour’s candidate, will leave party activists in the constituency feeling vindicated for resisting pressure from Jeremy Corbyn to select a left-wing pro-Momentum candidate.

In her impressive victory speech, she talked about the Labour Party “coming together” and only mentioned Mr Corbyn towards the end of her remarks.

But the fact that she mentioned fighting Brexit so prominently in her speech will delight pro-Remain MPs on the Labour benches in the Commons ahead of the big showdown with the Government on the Lords amendments to the EU Withdrawal Bill next week.

But while Labour celebrates and the Lib Dems congratulate themselves on a vastly improved performance, there will be serious recriminations in the Conservative Party after coming third in a seat they held in the Thatcher years in the 1980s.

“This is the largest swing from Labour to the Liberal Democrats in over a decade and the failure of Labour’s leadership to oppose the Conservatives’ hard Brexit cannot be hidden or forgotten.

“The collapse in the Conservatives’ vote is also damning.”

Pro-Remain Tory MPs will see the party’s dismal showing as a warning shot to Theresa May that many voters are opposed to a hard Brexit.

And this result may embolden some of the pro-Remain rebels on the Conservative benches to vote against the Government when the EU Withdrawal Bill returns to the Commons from the Lords on Wednesday.

Publicly, senior Tories will dismiss the result as a local by-election after their party has been in government for eight years. But privately they may be concerned about the potential electoral damage the chaotic Brexit process could inflict on the Conservatives.