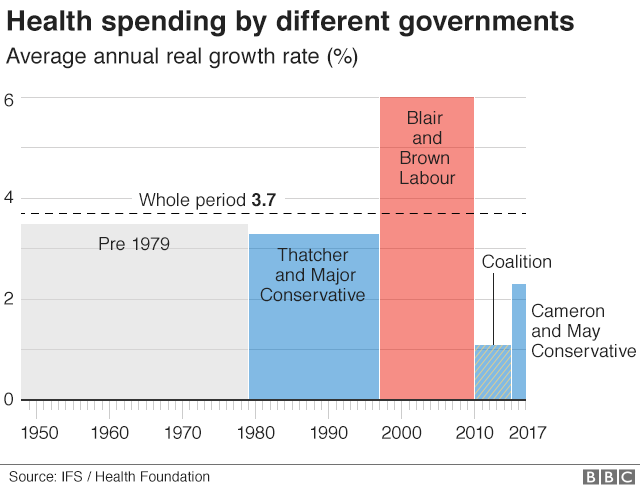 Tax rises will be needed to pay for the boost in NHS funding announced by the government, the health secretary says.

Jeremy Hunt said there would have to be an “increased burden of taxation” to fund the 3.4% average annual rises in NHS England’s budget over five years.

The rise means spending will be £20bn higher by 2023, with Mr Hunt saying tax will be used alongside any savings from Brexit and economic growth.

The plan means more money will also be given to the rest of the UK – about £4bn – although it will be up to the Welsh and Scottish governments to decide how that is spent.

But as it just covers NHS England’s budget, it does not include spending on training staff or prevention services, such as stop smoking clinics and obesity programmes, so the overall “health” increase might be lower than 3.4%.

Speaking to the BBC, Mr Hunt said the “exact details” of how the increase would be funded “will be announced in the budget”.

But he said it had been agreed on the basis that funding would come from three sources – Brexit, economic growth and the taxation system.

Mr Hunt did not spell out what that could mean for taxes – but to increase the burden of taxation governments can increase tax rates, extend what is included in taxes, such as increasing the goods and services VAT is applied to, or change the thresholds at which tax is charged.

Referring to Brexit, Mr Hunt said: “We won’t be paying subscriptions to Brussels… but that alone won’t be anything like enough.”

His comments come after Prime Minister Theresa May was criticised for suggesting a “Brexit dividend” would be used to partially pay for the increase in funding.

Shadow chancellor Mr McDonnell said: “The speculation about where it’s coming from, particularly the Brexit dividend, is just not credible as far as many commentators are saying.”

There has also been criticism from within her own party as well.

The Conservative chair of the Commons’ Health and Social Care Committee, Sarah Wollaston, said the idea of a Brexit dividend was “tosh”.

And Paul Johnson, director of economic think-tank the Institute for Fiscal Studies, said the only way the rise could be paid for was by an increase in taxes.

He said the financial settlement with the EU, plus the UK’s commitments to replace EU funding, “already uses up all of our EU contributions” for the next few years.