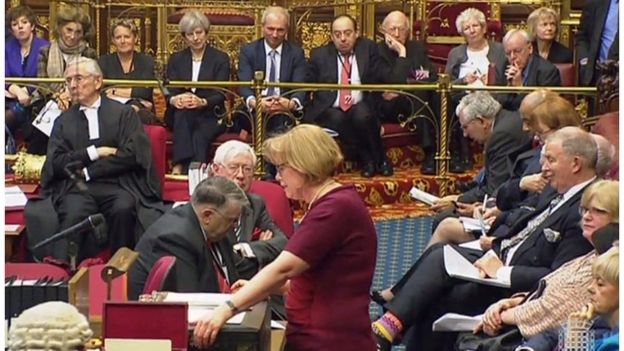 Tory Brexit rebel Dominic Grieve has insisted he is seeking a “sensible compromise” to prevent a fresh showdown in the Commons over Parliament’s role.

On Wednesday, MPs will vote on how much of a say they will have – after peers again defeated the government.

Mr Grieve said MPs should be able to “sensibly” express their views if there was no exit deal agreed with the EU.

But he insisted he was not trying to “micromanage” the negotiations or threatening to bring down Theresa May.

While the former attorney general said he believed Brexit was a “bad idea”, he told the BBC it was “almost certain” to happen.

Downing Street said it could not accept the “meaningful” vote” amendment backed by the Lords as it would “bind” Theresa May’s hands in her negotiations and change the “constitutional” balance between government and Parliament in foreign policy and treaty matters.

The UK is due to leave the European Union on 29 March, 2019. And negotiations have been taking place over the terms of its departure.

But there is an ongoing row about what happens if Parliament votes to reject the final deal reached between the two sides – or if no deal is reached.

One side says Parliament should intervene to prevent the UK from “crashing out” of the EU without a deal – but critics say the prospect of this happening would undermine the UK’s negotiating hand.

Peers decided on Tuesday that MPs should have to approve whatever the government decided to do next if there was no final agreement with the EU.

They backed, by 354 votes to 235, an amendment to the EU (Withdrawal) Bill designed to strengthen the terms of the “meaningful vote” that Theresa May has promised to give Parliament.

The 119 majority was 28 more than the last time peers voted on the issue.

Last week, the prime minister avoided defeat on the issue – but the would-be rebels said they were not happy with the concessions they were subsequently offered in return for not voting against the government.

Mr Grieve told BBC Radio 4’s Today programme he hoped Downing Street would take note of the Lords vote and that the two sides could resolve their differences in a way that “honoured” the trust that he and other MPs had placed in Theresa May following their meeting with her last week.

“I am hopeful the government will listen to what has come back from the Lords and we may be able to achieve some form of sensible compromise,” he said.

“The differences between us is not very great, but it is a significant difference.

What the Lords voted for

It would apply in three scenarios:

Under these circumstances, the government has said, a minister will make a statement in Parliament, setting out the government’s next steps.

The government had offered MPs the chance to vote “on neutral terms” on this statement. But the amendment backed by the Lords on Monday goes further, saying the statement would have to be approved by MPs.

If the UK looked like leaving the EU without a deal, he said it would be a moment of “national crisis”.

Asking Parliament to express its opinion in such a scenario through an “amendable but not mandatory” motion could, he suggested, defuse rather than escalate tensions.

“It has been suggested I want to collapse the government, I do not.

“By having a mechanism by which the Commons can express a view without, for example, moving to a motion of no confidence which could collapse the government, that can give us time to both influence the government and think what best to do next.”

Jacob Rees-Mogg, the chair of the influential European Research Group of Conservative MPs, has accused the Lords of being “cavalier” towards the UK’s constitution and seeking to “obstruct” Brexit.