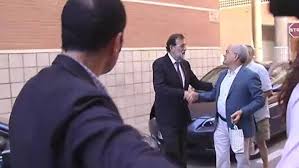 Former prime minister of Spain, Mariano Rajoy, has been seen in the Costa Blanca resort of Santa Pola.

It is understood he has returned to the town again as he may wish to return to his old position in the Land Registry Organisation where he was previously employed.

Not only has Rajoy lost his job as prime minister after losing a vote of no-confidence in the Spanish Parliament only two weeks ago, he has also resigned as leader of the Partido Popular (PP) and as an MP.

According to the Spanish media, Rajoy arrived in Alicante just before midday today (Tuesday) on a fast AVE train from Madrid and he will remain in the locality until tomorrow afternoon.