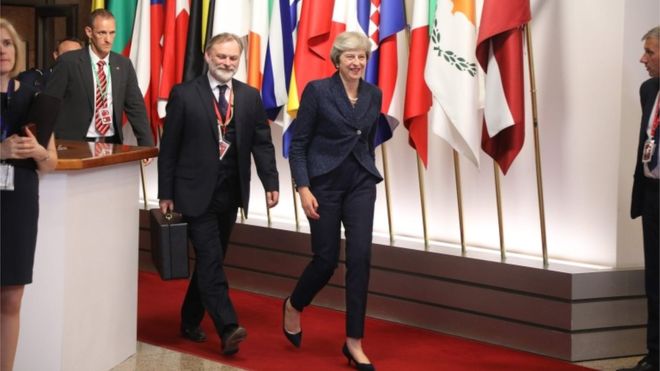 Forcing the UK to leave EU security pacts after Brexit risks the safety of EU and UK citizens, Theresa May has warned European leaders.

The UK says EU negotiators are blocking agreement on tracking terrorists and sharing information after March 2019.

The EU says as a “third country” the UK cannot have the same access to schemes.

The EU’s chief negotiator said they wanted an “ambitious” deal on trade and security but it must be based on “our values and principles”.

Michel Barnier also warned that “huge and serious divergence remains” in Brexit negotiations between the UK and EU and urged the UK to bring forward “workable and realistic proposals” for their future relationship.

“The time is short and I am ready to invite the UK delegation to come back to Brussels next Monday,” he said.

Theresa May addressed fellow leaders at a dinner on Thursday night, during the final European Council meeting before October, when both sides hope they will have reached agreement on the UK’s withdrawal and a blueprint for its future relationship with the EU.

The talks, which stretched into the early hours of Friday, were dominated by the issue of migration, amid a threat from Italy to veto the summit’s entire agenda if it did not get more help.

Mrs May left Brussels on Friday morning and Brexit will be discussed by the remaining EU leaders without her.

BBC political editor Laura Kuenssberg said the prime minister had hoped to use the dinner to persuade them it was time to adopt a more flexible approach in negotiations.

According to UK officials, Mrs May said EU leaders should tell their negotiators to allow the UK to continue to take part in schemes like the Prum mechanism for sharing DNA profiles, the Second Generation Schengen Information System – a database of “real time” alerts about certain individuals – and the European Criminal Records Information System.

Without UK participation in such schemes, she suggested their collective ability to fight terrorism would be reduced.

“We would no longer be able to share real-time alerts for wanted persons, including serious criminals,” she said.

“We would be able to respond less swiftly to alerts for missing people on either side of the Channel and reunite them with their loved ones.

“Our collective ability to map terrorist networks across Europe and bring those responsible to justice would be reduced.

“That is not what I want and I do not believe it is what you want either,” the prime minister said.

She urged them to “consider what is in the best interests of the safety of your citizens and mine and give your negotiators a mandate that will allow us to achieve this crucial objective.”

But the vice president of the European Parliament, Mairead McGuinness, said the focus should be on resolving the question about what happens to the border between Northern Ireland and the Republic of Ireland after Brexit, not security co-operation.

She told BBC Newsnight: “I am curious as to why this issue would be thrown on the table or why even a veiled threat is necessary”.

“It may not be a helpful move”.

And Mr Barnier said the EU wanted an “EU-UK ambitious partnership, on trade as well as security” but added: “We have to base this partnership on our values and principles, respecting also the UK red lines.”

Earlier this month he said the UK would be kicked out of the European Arrest Warrant deal after Brexit – which allows EU members to request the arrest and detention of criminals in other countries without extradition talks between them.

He argued it could not remain a part of it, because the UK wanted to leave the European Court of Justice and free movement rules.

After ten hours of talks about migration on Thursday night, EU leaders said that new migrant centres could be set up in EU countries on a “voluntary” basis.

She said much of the agreement was “around what the UK has been encouraging for some time, which is taking more action upstream in countries of origin so that we can ensure that people aren’t having to make and aren’t making these very dangerous journeys.”