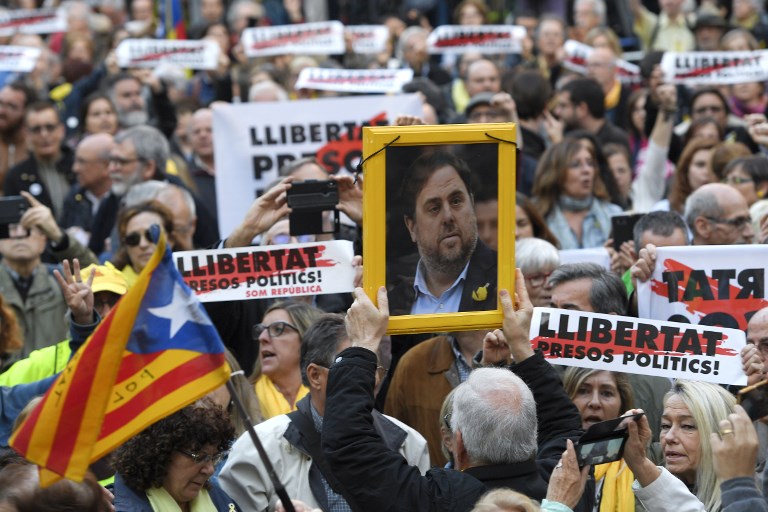 Six of the nine Catalan separatist leaders in custody over their role in Catalonia’s secession bid will be transferred to prisons in the region, Madrid said on Monday, signalling a thaw in tensions.

“It is expected that the six accused will between Wednesday and Thursday go to penitentiary centres, dependent on the prison services of the Catalonia government,” the interior ministry said in a statement, without giving the names of the separatists concerned.

According to the Spanish media, however, former Catalan vice president Oriol Junqueras, the leaders of pro-independence groups Jordi Sanchez and Jordi Cuixart and former president of the regional parliament Carme Forcadell are among the six.

Accused of rebellion for their role in Catalonia’s proclamation of independence in October 2017, the nine separatists are currently in jail in the Madrid region.

They are considered “political prisoners” by the separatist government in Catalonia, but the central government and the supreme court believe they have broken the law.

Spain’s prime minister, Socialist Pedro Sanchez, has been in power for a month after overthrowing his conservative predecessor Mariano Rajoy.

Last week he urged Catalan separatist leaders to “turn the page” on the contested independence referendum after regional president Quim Torra said he wanted another vote.

The announcement of these first prison transfers comes a week before a meeting in Spain’s capital between Sanchez and Torra on July 9th.

It will allow the prisoners to be closer to their families, as Barcelona is about 600 kilometres from the Spanish capital.

“The remaining three accused in custody will be transferred later,” the ministry said in its statement.