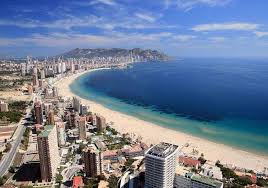 LATEST figures from the British holiday hotspot of Benidorm suggest the resort stands to finish 2018 with 500,000 less British holidaymakers than last year.

September registered an unusually quiet month for hoteliers in the resort.

Figures suggest there were 41,400 less Brits staying in Benidorm than in September 2017 and this drop in registered overnight stays has been noticed by hoteliers in the area.

“If this bleeding continues, the British market is expected to reach a loss of half a million”, warned hotel association Hosbec.

Hoteliers are blaming the resurgence of new tourist destinations and the emergence of online-based apartment sharing sites for the downfall in figures.

Hosbec noted: “The growth of tourist packages from other competing destinations of “sun and beach” such as Turkey (+ 69 per cent), Tunisia (+ 41 per cent) or Egypt (+ 58 per cent) is a reality”

The resort has seen this year an increase in Spanish tourists holidaying in Benidorm.

This native resurgence has bolstered the occupancy rates of Benidorm hotels in 2018, but these rates remain down on 2017 figures.

Hotels in Benidorm are being forced to consider luring tourists from other nations after the slump in the British market this year.

President of Hosbec, Toni Mayor, claims: “We must continue working to ‘seduce’ different markets in order to bring them to Benidorm.”