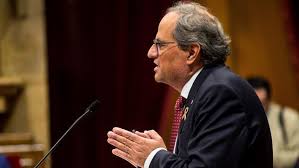 Catalan premier Quim Torra sent a letter to Prime Minister Pedro Sánchez at the end of September, which he also sent to US President Donald Trump, the pope and other world leaders.

The letter called for help in mediation on the ongoing political situation in the region, but made no reference to the ultimatum he made on Tuesday, when he threatened to withdraw support for the PSOE government unless an independence referendum is called within a month.

Last night Mr Torra confirmed that support for Mr Sanchez in the Congress of Deputies would come to an end in November, if negotiations did not start soon.