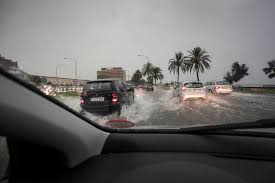 A British couple are thought to be among six people who died during the night when flashfloods caused by torrential rain hit Mallorca.
A sixth person was confirmed dead by authorities on the island at around 11am at which time at least 20 people, including more British nationals were still missing.
The worst affected area was around the town of Sant Llorenç in the northeast and the British couple were reportedly swept to their deaths as the taxi in which they were travelling was engulfed by surging flood water. The driver is amongst those missing.
Prime Minister Pedro Sanchez tweeted his “solidary and support for the relatives and friends of the victims, and for all those affected”. His office announced that he would be travelling to the affected zone today.