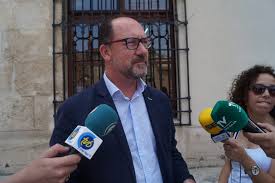 César Sánchez, the president of the Diputación de Alicante and the mayor of Calpe, is the highest paid politician in the province of Alicante, earning 80,999 euros per year, almost seven thousand euros more than the President of the Generalitat Valenciana, Ximo Puig.

The next highest paid politician is the mayor of Alicante, Luis Barcala, with 66,004.62 euros per year, according to the 2018 report on the remuneration of elected officials of local corporations (ISPA) published by the Ministry of Territorial Policy and Public Service that reveals the salaries of the staff in 8,124 municipalities and 52 councils.

Barcala, who runs the largest city in the province, with 329,988 inhabitants, has been in office for just seven months, having assumed control in April. Barcala’s mayoral salary is only approached by that of the mayor of Elche, Carlos Gonzalez, who draws an annual wage of 61,927 euros as the leader of a city that has one hundred thousand inhabitants less than Alicante.

Other earners included in the top five are Emilio Bascuñana, mayor of Orihuela, who has a salary of 57,125 euros; and Toni Pérez of Benidorm, with 55.999 euros, who are placed 4th and 5th respectively.