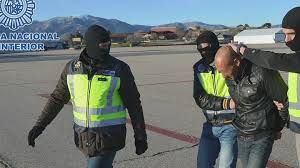 Spanish police have arrested a former Venezuelan official and an exiled opposition leader’s relative and seized more than 115 properties in a money-laundering investigation into a ring that allegedly bought real estate in Spain with illicit funds from Venezuela.

Antonio Ledezma, the exiled mayor of Caracas, confirmed that his son-in-law, Argentinian businessman Luis Fernando Vuteff, was among the four arrests in Madrid that were announced Thursday by the Spanish police.

The National Police statement said international arrest warrants have been issued for three more suspects. It did not name any of those arrested or being sought.

The statement said police also seized more than 115 properties worth about 60 million euros ($68.9 million), including a hotel, dozens of apartments and a development with 60 luxury villas in the southern beach resort of Marbella.

Also arrested, according to people familiar with the probe, were two business associates of Vuteff and Nervis Villalobos, a former Venezuelan deputy energy minister.

Villalobos, who started his career as an engineer in a state-owned power-generation company before serving in the government of late Venezuelan leader Hugo Chavez, had been recently released on bail by a court in the Spanish capital investigating him for a separate bribery case.

The former Venezuelan official is also sought by the United States for his role in a kickbacks-for-contracts scheme that plundered billions of dollars from the Venezuelan state oil company, PDVSA.

Spain had agreed to extradite him, but only after Villalobos is tried for cases pending in Spain. Villalobos has also been charged with money laundering in a related probe in Andorra.

Although Villalobos has had many run-ins with law, the arrest of Vuteff in a case involving money laundering by officials linked Chavez’s regime has surprised the Venezuelan community-in-exile. The businessman had been a leading campaigner for the release of his father-in-law, who was first jailed and then put under house arrest by the country’s intelligence service, which accused him of conspiracy.

After fleeing the country, Ledezma established his residence in Spain last year and has become one of the leading voices in exile opposing Venezuelan President Nicolas Maduro.

The former Caracas mayor told The Associated Press he was not aware of any illicit activities by his daughter’s husband but said it was up to the Spanish judicial system to issue “the last word.”

“I trust that investigations will free him from any responsibility,” Ledezma said from Miami. “Personally, I don’t have or have had any relationship with anybody related to the cliques that have destroyed my country.”

The main suspect in the case, a Portuguese businessman, is being investigated in the United States for allegedly laundering more than $1.3 billion obtained through bribes in public contracts, the Spanish police statement said.

Portuguese financier Hugo Gois was charged in July by the U.S. Justice Department with conspiracy to commit money laundering in connection with the alleged billion-dollar Venezuelan scheme.

His lawyer said Thursday that Gois was not the subject of any international arrest warrant. Pedro Marinho Falcao, a lawyer in the northern Portuguese city of Porto, told the AP that Gois has been collaborating with Spanish and Portuguese police investigating missing Venezuelan funds.

A lawyer in the U.S. is also preparing Gois’ defense there, Marinho Falcao said, adding that his client “had no knowledge of the alleged illicit provenance of the funds.”

He said Gois leads “a perfectly normal life” with his family in Porto.