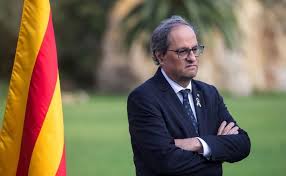 The ongoing war of words between the Catalan Generalitat and the Government in Madrid continues, after Catalan regional president, Quim Torra, announced that he would be setting up a “government in exile” at the end of the month.

The announcement was made after a meeting between Mr Torra and former leader Carles Puigdemont in the Belgian town of Waterloo.

The proposal would see the group led by Mr. Puigdemont, with representation from the main independence parties.

Recently Mr Torra issued a warning to prime minister Pedro Sanchez, that his party would not continue to support the PSOE government if there was no movement on a bid for an independence vote.