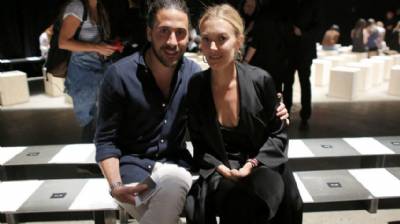 ZARA tycoon Amancio Ortega’s daughter Marta has announced a date for her wedding to model scout and PR guru Carlos Torretta, having confirmed their engagement in the spring.

Marta Ortega, 34, and Carlos – whose dad Roberto Torretta is an acclaimed Argentinian fashion and accessories designer regularly seen in boutiques around Spain – will wed on November 16 in a small, close-family-only ceremony at her parents’ family home, a four-storey seaside villa with a full glass front in A Coruña’s so-called ‘Golden Mile’, a neighbourhood which regularly appears on postcards of the Galicia city.

After their ceremony, which will be a non-religious affair – but where the third star of the show will be Marta’s five-year-old son Amancio – the reception will be held at A Coruña’s Royal Yacht Club, a mid-20th century building located in one of the city’s most exclusive areas.

Amancio Ortega, Spain’s richest man and owner of the Inditex empire which is most famous for its budget brand Zara, is said to have hired the entire yacht club, of which he is a member, for the day at a cost of €28,000 – although, given that 400 people, including the bride and groom, will be at the reception, this works out at a fairly un-starry price of €70 a head and will include cocktails for everyone.

Next, on the night of Saturday, November 17, a party will be held at the family equestrian centre, Casas Novas, in Arteixo (A Coruña province).

Marta and Carlos were engaged in March this year, having first been photographed together in September 2016, but the bride-to-be did not show off her white-gold-and-diamond ring until May 2018.

When announcing the wedding back then, it was initially said the couple would be marrying in the country estate of Anceis in the village of Cambre (A Coruña province), where Marta’s first wedding to international showjumper Sergio Álvarez Moya took place in 2012.

Marta, who also competes in international showjumping, met Sergio when they were children, and worked as his groom for a while, although they did not start dating until 2009.

But their spectacular wedding, which made the pages of Spain’s main glossy magazines, was the start of what would be only a short-lived marriage.

Contrasting sharply with her plans for her second wedding, Marta Ortega’s nuptials six years ago involved a giant and lavish set-up with hundreds of celebrities in attendance and a huge, flamboyant reception at the exclusive Hotel Finisterre with the catering provided by top-flight chefs, and the bride resplendant in a dress created by US-born Cuban designer Narciso Rodríguez.

In January 2015, a month before their third wedding anniversary, Marta and Sergio announced they had separated and were due to be divorced and to discuss custody of their son Amancio, then 18 months old.

Sergio, now 33, returned to his native Gijón (Asturias) in the neighbouring region and took some of his horses with him – those he owned in his own right, since others were owned by his now-ex wife.

It is expected that all aspects of Marta’s marriage to Carlos will be far more low-key – it has even been hinted that she may be wearing a Zara wedding dress.

Carlos, a graduate of PR and fine arts from New York’s Pace University and a former scout for Élite Model Agency, had been splitting his life between the USA and Spain until he met Marta in 2016 and decided to live permanently in the latter country.

He set up West Village Images, a media PR firm, in Madrid and he and Marta have been living in an apartment in the capital’s up-marked Salamanca district.

Marta, who has a degree in International Business Economics at London’s European Business School, was sent on an intense graduate training programme from 2007 around the globe, spending time in Inditex offices and shops in Paris, Hong Kong and other key locations in preparation for her taking over the business one day.

She is employed in product design and development for Zara Woman and works actively with her father’s Amancio Ortega Foundation.

Marta is the youngest of Ortega’s children and the daughter of his second wife, Flora Pérez Marcote.

She is regularly seen in Zara clothing, and each garment she is photographed in is snapped up from stores across Spain within hours of her appearing in them.