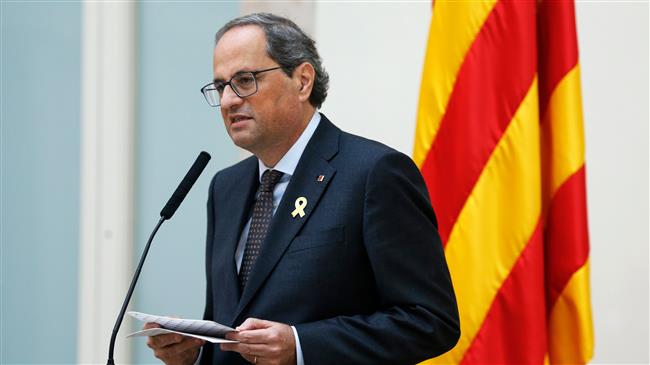 Spanish prosecutors called Friday for Catalan separatist leaders to be jailed for up to 25 years on charges of rebellion or misuse of public funds over last year’s failed secession bid.

In a statement ahead of an upcoming Supreme Court trial, the prosecution service said it was seeking prison sentences against 12 Catalan leaders ranging from seven to 25 years, the latter jail term being sought for former Catalan vice-president Oriol Junqueras.

But in a sign Spain’s socialist government disagreed, the attorney general’s office announced it would ask for just 12 years jail for Junqueras, accusing him of sedition and misuse of public funds rather than the more serious charge of rebellion.

The sensitive trial is expected to start in early 2019 — more than a year after Catalan leaders attempted to break away from Spain in October 2017 by staging a referendum despite a court ban and subsequently proclaiming independence.

Some Catalan leaders such as deposed regional president Carles Puigdemont fled abroad, while others like Junqueras remained and were put into custody pending the trial.

“They can lock us up in here for years and years, but it will not weaken the desire for freedom,” Junqueras said in a letter on Thursday.

In a separate case, prosecutors said they were seeking four to 11 years jail against former regional police leaders including Catalonia’s then police chief Josep Lluis Trapero, who is also accused of rebellion.

“Does anyone think that the two million independence supporters will just disappear by demanding (a total of) 200 years of jail for pro-independence leaders?” he asked.

In its statement, the prosecution service said pro-independence leaders had planned to use all possible means to achieve secession, “including — knowing that the state wouldn’t accept this situation — any violence needed to secure this criminal result”.

It said separatist leaders had instigated “big citizen mobilizations” that represented an “intimidating force” and had also used the regional police force of 17,000 agents, who followed their orders.

The charge of rebellion has caused controversy in Spain, not just among those who support Catalan independence but further afield among legal experts.

According to Spanish law, rebellion is “rising up in a violent and public manner,” to among other things “breach, suspend or change the constitution” or “declare independence for part of the (Spanish) territory”.

Military officers behind a 1981 attempted coup in Spain were found guilty of rebellion, for instance.

But many legal experts contest the use of rebellion in the Catalan case, saying there was no violence during the secession bid, except that used by Spanish police on October 1, 2017 as they tried to stop people from voting in the banned referendum.

Spain’s justice minister acknowledged the controversy on Friday, telling reporters there was a “legal, even social debate on what happened in Catalonia in September and October last year”.

“This debate also took place at the attorney general’s office,” Dolores Delgado said, pointing out that it had decided to press charges of sedition, misuse of public funds and disobedience against Catalan leaders, and not rebellion.

She denied it was a political decision on the part of the Socialist government, which is in a minority in parliament and depends on other lawmakers, including from Catalan separatist parties, to pass bills or approve the budget.

But the right-wing opposition accused the government of bowing to separatist pressure to secure support in parliament.

In a tweet, conservative lawmaker Pablo Casado accused Prime Minister Pedro Sanchez of being “hostage to coup plotters” and “no longer legitimate to lead the government”.