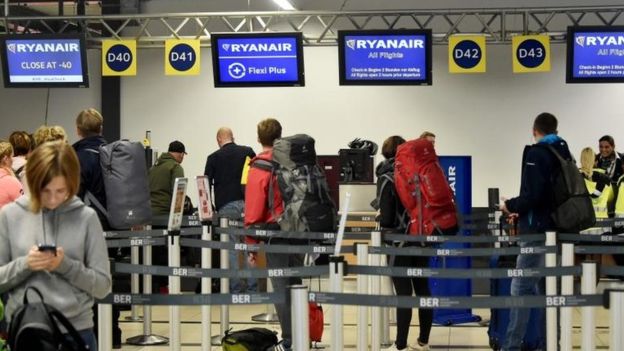 Online bookings and check-in with Ryanair will close for 12 hours after the airline said it needed to shut down its website and mobile phone app.

It said the shutdown from 17:00 UK time on Wednesday to 05:00 on Thursday was needed for a computer systems upgrade.

Ryanair “sincerely apologised” to customers for any inconvenience, and urged anyone needing to check in to do so before the closure.

There are about 1.5 million visits to the website every day, with 22,700 boarding passes downloaded each day.

Ryanair’s policy is to charge passengers an extra £55 if they need to check in at an airport, and the airline says all fees will stay in force.

The carrier’s online check-in facility is only open between 48 hours and two hours before a flight for passengers who have not paid extra to select a seat.

Robin Kiely, the Irish carrier’s head of communications, said in a statement: “As part of our continued digital development, a web closure and system upgrade will take place for 12 hours, from 17:00hrs (UK time) on Wednesday 7th November, until 05:00hrs (UK time) on Thursday 8th November, during which time our online check-in service will not be available.

“Flight bookings and changes will also be unavailable during this period. Customers travelling on Wednesday or Thursday should check in for their flight on Tuesday 6th November.

“We sincerely apologise for any inconvenience caused by this upgrade, which will further improve Ryanair.com, Europe’s largest travel website.”

Also on Monday, Ryanair reported an 11% rise in traffic in October, as it carried 13.1 million passengers.

That total includes 500,000 passengers from Lauda, the airline founded by former Formula One champion Niki Lauda and recently bought by Ryanair.

During October, the airline had to cancel about 300 flights due to a combination of an airport handler strike at Brussels Zaventem, bad weather, and continuing air traffic control staff shortages in the UK, Germany and France.

Last month, the union called the airline’s decision to close its base in Bremen, Germany, a “declaration of war” on unions and said the move must be reversed to make progress on talks.

Ryanair has faced a series of industrial actions across Europe this year.