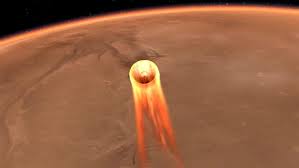 Spanish scientists have joined in the celebrations after the latest Mars probe – InSight – successfully landed on the Martian surface.

The probe, which completed it’s 300-million-mile journey yesterday afternoon, confirmed touchdown and the start of it’s two year mission on the red planet.

The Spanish Centro de Astrobiología – or CAB – supplied wind sensors on the craft, as one of a number of European partners on the NASA mission.