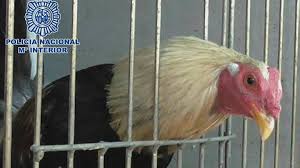 Spanish police say they have arrested 182 people alleged to have participated in a cockfight in southern Spain.

The arrests took place on Saturday in the southeastern region of Murcia, when police raided the clandestine event that organizers called a national championship of cockfighting.

Those arrested were charged with animal cruelty, police said Monday.

The police raid discovered six dead roosters and 97 live ones, and agents confiscated 300,000 euros in cash involved in illegal bets.

Police say the fight involved breeders of roosters from across Spain, who equipped the birds with metallic spurs and gave them drugs to increase their aggressiveness in the bouts.