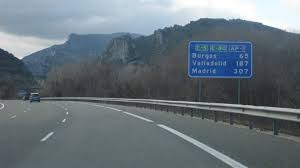 Traffic on the AP-1 motorway has rocketed by 58% since the government scrapped the tolls on December 1, giving an idea of what is yet to come when the next batch of pay-per-use highway franchises come up for renewal.

Public works minister José Luis Ábalos opted to continue with the previous government’s plans not to renew any of the toll contracts on Spain’s motorways once they expired, and a sub-commission in Parliament has been set up to work out how they will fund their maintenance in future.

The AP-1 was the first, and another nine followed a fortnight ago – the AP-7 between Cartagena (Murcia) and Vera (Almería) and the Alicante ringroad on the same motorway; the AP-36 between Ocaña (Toledo province) and La Roda (Albacete province); the AP-41 from Madrid to Toledo; the M-12 Madrid airport link road, and three Madrid outer-suburban ‘radial’ highways, the R-2, R-3, R-4 and R-5.

These nine, however, are only toll-free overnight from midnight to 06.00, but fees for their use during the day have been slashed by 30% to encourage users.

Toll motorways in general have been losing traffic – and money – since the start of the financial crisis as drivers sought to save cash, and the firms’ response of putting up prices to claw back more backfired, with vehicle numbers plummeting as a result.

This has become patent in year-end traffic figures for the AP-1 (pictured) between Burgos (Castilla y León) and Armiñón (Álava province, in the Basque Country), with a 58% rise in a month, skewing the total for 2018 to show an annual increase of 5.26%.

Assuming the current government stays in power until the next general elections are due in November 2020 – or a new government decides to continue with the motorway ‘buy-back’ plan – another handful will be toll-free by then.

On New Year’s Eve this year, the toll franchises for the AP-7 from Tarragona (Catalunya) to Castellón and from Silla (Valencia province) to San Juan (Alicante province), plus the AP-4 in the provinces of Sevilla and Cádiz will also end and not be renewed, meaning these roads will become free of charge from January 1, 2020.

So far, of the 10 toll roads now back in State hands, only two have seen a reduction in traffic rather than an increase – the R-3 Madrid-Arganda del Rey ‘radial’ highway, and the R-5 between Madrid and Navalcarnero (Toledo province) – the first of these by 24%, down to 8,214 vehicles a day, and the second by just 0.85%, to 10,868 per day.

However, the latter has long been the motorway with the lowest volume of traffic in the country, at just 1,193 vehicles a day.