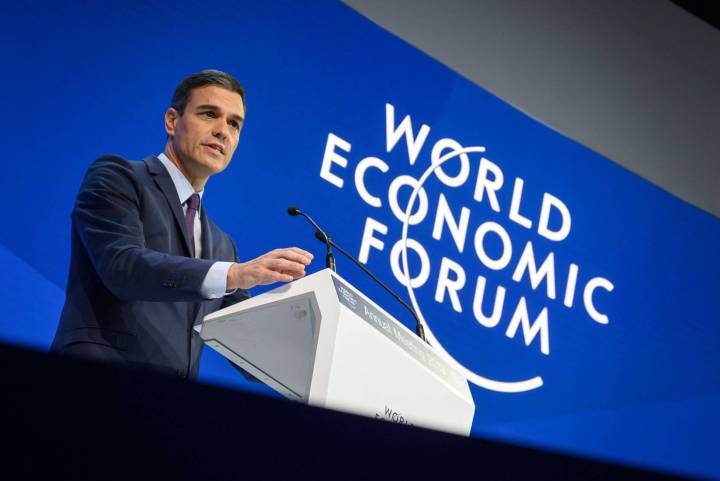 Pedro Sánchez has met with opponents of the Bolivarian regime at a global gathering of Socialist parties in Dominican Republic.

The crisis in Venezuela is monopolizing Spanish Prime Minister Pedro Sánchez’s official trip to Latin America, where he is spending three days in Dominican Republic and Mexico to reinforce bilateral ties.

As soon as he landed in Santo Domingo, Sánchez, of the Socialist Party (PSOE), met with Venezuelan opposition leaders at a meeting of the Socialist International (SI) held in the Dominican capital. In his speech, Sánchez called Venezuelan President Nicolás Maduro “a tyrant.”

“We are socialists because we defend freedom. Whoever responds with bullets and prisons to the desire for freedom and democracy is no socialist, he is a tyrant. Venezuelans must feel the support of the Socialist International, and so must Nicaraguans,” said the Spanish leader at the world gathering of leftist political parties, where members have decided to expel the Sandinista National Liberation Front, led by Daniel Ortega, over the repression in Nicaragua.

Carlos Valero, a deputy for the center-left Venezuelan party Un Tiempo Nuevo (A New Era), thanked Sánchez for his support and applauded his decision to recognize Juan Guaidó as the legitimate president next week.

Back in Spain, the opposition is criticizing Sánchez for not having recognized Guaidó already. But Venezuelan dissidents present at the Santo Domingo gathering expressed gratitude for Spain’s support and assured Sánchez that they will keep up a peaceful fight, contrary to the Venezuelan government’s warnings about an imminent bloodbath.

“We are very grateful. PM Sánchez is emotionally and spiritually committed to the Venezuelan struggle,” said Valero. “He told us there is a power vacuum that must be filled by the National Assembly. He has guaranteed that he recognizes Guaidó as the leader of the Venezuelan transition because he is the leader of the legitimate National Assembly and he will be guiding the election process. The eight-day deadline is approaching, and next week Spain and Europe will recognize Guaidó. We are convinced that part of the solution will come from Spain’s and Europe’s support. We don’t want the Venezuelan agenda to divide Spanish politics.”

Spain, France, Germany and Britain have given Maduro a week to call elections, or else they will recognize Guaidó as the legitimate president, as most of the main Latin American countries, the United States and Canada have already done.

Sánchez’s next stop is Mexico, the only major Latin American country not to have recognized Guaidó yet. It seems very unlikely that Sánchez and President Andrés Manuel Lopez Obrador will reach an agreement on this subject, but both will attempt to close the distance between them at their official meeting in Mexico City.

Sánchez has been showing sympathy for Guaidó since Thursday, when he attended the World Economic Forum in Davos, Switzerland and praised the latter’s “courage.”

With practically no more attempts at mediation between Sánchez and Maduro, the Spanish government is positioning itself on the side of the Venezuelan opposition. President Maduro, in the meantime, has told Sánchez that he’s the one who should be calling elections in Spain, considering he is in power after a no-confidence vote against former PM Mariano Rajoy in May of last year.