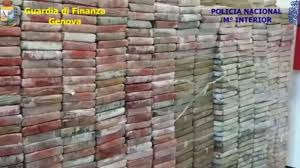 One man has been arrested in a joint operation between Policia Nacional, and law enforcement agencies in Italy and Columbia.

2.5 tonnes of cocaine was seized in two shipments which arrived in Italy, but was bound for Barcelona. Officers intercepted the cocaine, replaced it with salt and sent the ship on to Spain as planned.

A 59-year-old man was arrested when he arrived in Barcelona to collect it. Police said it had a street value of around €500m