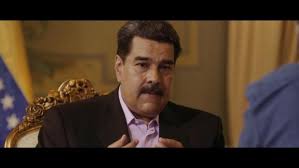 Évole bravely visited the Venezuelan capital, Caracas, for the person-to-person interview – against the advice of the Spanish foreign office, which has recommended nobody travel to the country unless absolutely necessary.

Sánchez announced today that Spain, in line with the rest of the European Union – including the UK – officially recognised Guaidó as president, despite Maduro’s supporters, such as Russia and Cuba, calling the new Venezuelan leader’s taking over a coup d’état.

During the show, which aired on Sunday, Maduro said: “It’s as though I told the EU it had seven days to recognise the Republic of Catalunya.”

Asked whether he was considering the possibility of civil war, Maduro said: “That depends upon the level of madness of the northern empire [the USA] and its allies.”

He warned that the ‘organised people’ had ‘access to a weapons system and military training’.

The ‘people’s army’ can potentially swell to two million members – 50,000 units, each led by a sergeant.

Maduro added: “The people are arming themselves already. They know where to go, what to do, and how, to defend themselves.

“I’m not going to let anyone twist my arm,” he insisted, and ruled out calling a snap general election.

“There are presidential elections scheduled for 2024, which is when they will be held.”

Concerning the EU’s ultimatum – that he should call an election within seven days or the bloc would recognise Guaidó – Maduro said he wanted to ‘wait until Monday’ (today) to ‘see which member States commit that mistake’.

Of the pro-Chávez brigade, or chavistas as they are known in the Spanish language, Maduro says: “We are a revolutionary movement; you can’t qualify us as left-wing or right-wing. That’s where Pedro Sánchez is mistaken – he’s trying to become the benefactor father of the left-wing world, but we’re above those descriptions.

“Sánchez has bowed down to Trump’s policies. He’ll lose a lot of left-wing votes, which will cost him the presidency.”

Maduro was inevitably questioned about the arrest of a driver and three reporters from the Spanish news agency, EFE, in Caracas last week – the reporters, one Spanish and two Colombian, having now been released.

“It wasn’t an arrest, it was a check-up, and that’s legal for up to 48 hours, like in any country in the world,” Maduro argued.

Évole asked Maduro for his opinion on various world leaders.

“I’d tell Trump, ‘stop it now, Donald, you’re making mistakes that are going to stain your hands with blood. I wouldn’t tell Trudeau [Canada’s president] anything, because he doesn’t give orders. I’d tell Bolsonaro [Brazil’s new far-right president] to look after his health, which is fairly poor. I’d tell López Obrador [Mexican president] that I agree with his vision of Latin America. I’d tell Macron [president of France] to listen to the ‘yellow jackets’. As for Angela Merkel, I once met her and said to her, try to see Venezuela differently. To Macri [president of Argentina] I’d say, get your skates on, because you’re going to lose the presidency this year. To Erdogan [Turkish leader] I’d say, let’s continue to strengthen our friendship.”

Maduro also had messages for Spanish party leaders, including the PP and Ciudadanos, whom he criticised for their ‘neo-colonial vision’ of Venezuela, their ‘inability to do politics’ and warned that they were ‘on course for a collision’ with the South American nation, and for Podemos’ leader Pablo Iglesias over the left-wing politician’s criticism of the economic situation in Venezuela, saying: “He should concentrate more on keeping his own party together and not bow to pressure. Anyone who speaks badly of Venezuela thinks they’re gaining points, and I think the opposite.”

Pedro Sánchez received a barrage of criticism: “He’s farcical. Nobody elected him. It should be he who calls elections and I think 80% of the Spanish public agrees. He hasn’t got the warmth or support of the people behind him. And I think it’s going to go badly for Sánchez. He’s no right to give lectures to Venezuela. We haven’t been listening to Madrid’s lectures for ages. It’s going to go worse for you lot than for Aznar in Iraq [referring to former PP leader and Spanish president José María Aznar who lost mass support by deploying troops to the Iraq war].

“Pedro Sánchez, I hope you don’t end up with blood on your hands by aligning with Trump. We’ll never accept anything by force, Pedro. It’s you who’ll end up sinking.”