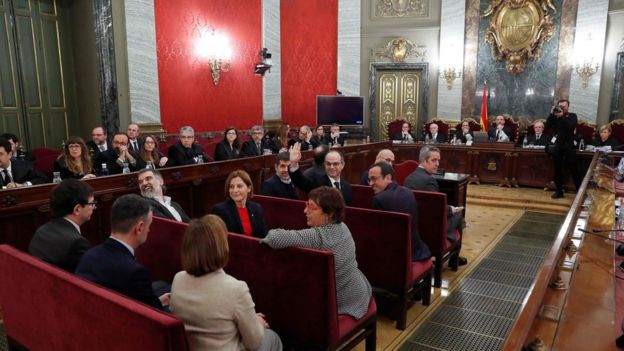 A dozen leaders of Catalonia’s failed 2017 independence bid have gone on trial in Madrid, facing charges including rebellion and sedition.

If convicted, some could face up to 25 years in prison.

The semi-autonomous region of Catalonia held an independence referendum on 1 October 2017, and declared its independence from Spain weeks later.

A defence lawyer said the trial was about “the right to self-determination and the democratic principle”.

The lawyer, Andreu Van Den Eynde, said “there is no international or European Union law that prevents the secession of a sub-state entity, it does not exist”.

Spain’s 1978 constitution speaks of “the indissoluble unity of the Spanish nation”.

The Catalonia crisis is considered the most serious to hit Spain since the era of fascist dictator Francisco Franco, who died in 1975.

Nine of the defendants have spent months in pre-trial detention, and arrived at the court on Tuesday morning under guard. The remaining three had been free on bail.

The most high-profile of the Catalan leaders on trial is former Vice-President Oriol Junqueras. His superior – former President of Catalonia Carles Puigdemont – fled abroad and remains in exile.

Mr Junqueras faces the longest potential sentence for the alleged crime of rebellion, at 25 years. Others accused of the same charge, including former speaker of the Catalan parliament Carma Forcadell, could receive sentences of 16-17 years.

They also face the lesser charge of sedition, as do several former ministers.

There is also the accusation of misuse of public funds, in organising a referendum that had been declared illegal by Madrid.

In Spanish law, the charge of rebellion involves a public violent uprising – something those accused deny ever happened.

Some of the accused, speaking to the BBC ahead of the trial, said the proceedings were political in nature. Any violence, they said, was on the part of police and was committed against voters in a crackdown which made headlines around the world.

As the trial began, one of the accused, Jordi Sànchez, tweeted: “the trial against the vote begins”.

“I am going with my head held high, convinced that self-determination is not a crime,” he wrote.‏

Outside the court, crowds of supporters and opponents of Catalonia’s independence bid gathered.

Spain’s El Pais newspaper reported that many were blocked from entering the Supreme Court by police – including, briefly, family members of the accused, until some confusion over who was permitted to enter was cleared.