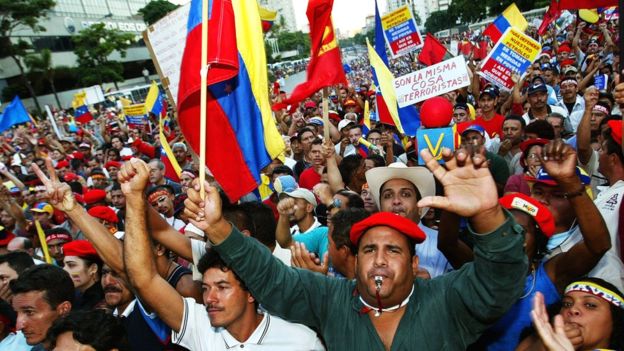 Venezuela is a country of striking natural beauty, ranging from the snow-capped Andean peaks in the west, through the Amazonian jungles in the south, to the beaches of the north. It is also among the most highly urbanised countries in Latin America.

The country has some of the world’s largest proven oil deposits as well as huge quantities of coal, iron ore, bauxite and gold. Yet many Venezuelans live in poverty, often in shanty towns, some of which sprawl over the hillsides around the capital, Caracas.

Former president Hugo Chavez , who died in 2013, styled himself a champion of the poor during his 14 years in office, pouring billions of dollars of Venezuela’s oil wealth into social programmes.

The government of his successor, Nicolas Maduro, has had to struggle with plummeting oil prices amid an economic crisis characterised by shortages of basic goods and soaring inflation.

President Nicolas Maduro has governed since March 2013, when he assumed the role of acting president on the death of Hugo Chavez and triumphed in a presidential election held the following month.

He was re-elected for a second, six-year term in May 2018, winning millions more votes than his closest challenger in an election marred by an opposition boycott and claims of vote-rigging.

At the time of his re-election, Venezuela was in the throes of a deep economic crisis, with rampant inflation and lack of basic necessities, despite boasting the world’s biggest oil reserves.

Mr Maduro had failed to undertake any significant reform of the economy and its state-led policies.

He faced a wave of anti-government protests in 2016 and 2017, when falling oil prices forced his government to curtail its social programmes.

Also in 2017, he established a Constituent Assembly, which opponents said would allow him to bypass the National Assembly and strengthen his grip on power.

A crackdown on the opposition has prompted the US to impose sanctions and the South American trading bloc Mercosur to exclude Venezuela.

President Maduro has done his utmost to silence independent media, says Reporters Without Borders, which lists Mr Maduro among its “enemies of press freedom”.

Some key dates in Venezuela’s history:

1964 – Venezuela’s first presidential handover from one civilian to another takes place when Raul Leoni is elected president.

1973 – Venezuela benefits from oil boom and its currency peaks against the US dollar; oil and steel industries nationalised.

2013 – President Chavez dies at age 58 after a battle with cancer. Nicolas Maduro, Hugo Chavez’s chosen successor, is elected president by a narrow margin.