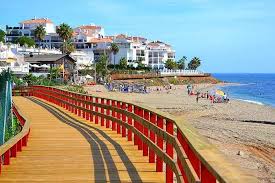 The nine-year-old is believed to have gone into anaphylactic shock after suffering a severe allergic reaction to the food.

She fell ill last Friday afternoon at a hotel in the municipality of Mijas where she was staying while on holiday with her family.

The youngster, who is yet to be named, was rushed to hospital after having an allergic reaction to milk and nuts, according to Malaga-based newspaper Sur.

The child is said to have been rushed first to Costa del Sol Hospital in a “critical condition”.

She was transferred to the hospital in Malaga when her condition worsened.

An autopsy was carried out at Malaga’s Institute of Forensic Medicine on Tuesday morning.
The results – sent to an investigating judge tasked with heading a probe into the tragedy – have not been made public.
Further tests will now take place at the Institute of Toxicology in Seville to confirm whether her death is linked to an allergic reaction to the food she tasted.
The hotel where the girl fell ill has not been named.
No-one was available this morning morning to comment officially.

News of the tragedy emerged as health chiefs confirmed they were probing the death of a woman who fell ill after eating at a Michelin-starred restaurant in the east coast Spanish city of Valencia.

The 46-year-old had eaten wild mushrooms with rice during a meal to celebrate her husband’s birthday.

Owner Bernd Knoller has announced the closure of Riff, which has one Michelin star, until it becomes clear if the death was caused by the meal she ate.