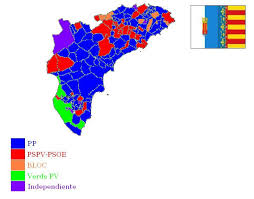 Valencia regional president Ximo Puig has dissolved Parliament and called an election for April 28, to coincide with the country’s going to the polls to vote on their national government.

Regional elections for Spain’s 17 federal territories, plus its two city-provinces of Ceuta and Melilla on the northern Moroccan coast, are due to take place on May 26, at the same time as the local council elections.

Certain regions hold theirs separately from the rest, including Catalunya and Andalucía.

Puig’s five socialist ministers voted in favour of his holding elections a month early, but the five representatives of his coalition partners, the left-wing regional party Compromís, voted against.

Compromís’ leader Mònica Oltra (pictured) says she ‘cannot see any political reason’ for bringing the regional election forward to coincide with the general.

This is the first time the Comunidad Valenciana has broken away from the standard regional electoral calendar.

Among Puig’s reasons are that his team, who have been in power for four years – after 20 years of continuous governing by the right-wing PP – have reached a ‘natural break’ in their work and that this is the ideal time to stop and reflect ahead of their next leg of plans to overhaul the region after its two decades of stagnation.

He also points out that the Comunidad’s biggest challenge, which is its considerable underfunding and underinvestment at State level that it has suffered from for decades, should be highlighted and pushed to the forefront nationally, making the general election a good time to give the issue ‘visibility’.

It will, additionally, give the existing regional government a chance to use its campaign to battle against the ‘worrying’ rise of the far right and of ‘radicalised’ parties, pushing the message home nationally and ‘projecting the region’s values of dialogue, honesty and efficiency’.

Bringing the elections forward had been under discussion for some time in the past few months as the current term of office came to an end, but after the poor results achieved by the socialists in the December 2 regional elections in Andalucía, talks were suspended.

It was the snap decision by national president Pedro Sánchez, leader of the socialists at central government level, to call an early election in light of the impossibility of gaining support for his 2019 budget, that led to Puig’s reconsidering the move.

He now says he wants Valencia’s underfunding situation to be thrust into national debate and for the pact between the socialists and Compromís – the so-called Acord del Botànic, or Botanic Agreement, allowing the two parties to govern with the support of left-wing Podemos – to be revisited and amended where necessary.