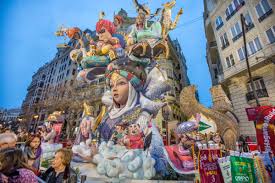 The official program for this year’s biggest fiesta in Valencia, Fallas 2019, has been released, with the party taking place right through to March 19.

You can catch something happening every day in the city, such as the rather noisy but traditional mascletàs – fire crackers – in the Plaza del Ayuntamiento.

This weekend we see events such as the arrival of the Moors and Christians, a night show and huge fireworks display on Saturday, and on Sunday a fantastic heritage parade through the streets, and the inauguration of the street markets on Tuesday.

On Saturday, March 16, there are parades and prize giving celebrations, as well as fireworks at night, and on Sunday, March 17, which is the first official day of the celebrations of the Fallas, there is a huge party and one of the biggest and brightest parades through the city streets, culminating with fireworks on the Paseo de la Alameda at 1 in the morning.

On Monday, March 18, there is a tribute to the poet Maximilià Thous, and a tribute to the Serrano teacher, which will take place at their respective monuments, and another main parade through the streets, with another major fireworks display.

On Tuesday, March 19, the Cremà de Fallas 2019, there will make a floral offering, followed by mass in honour of San José, then at 7 p.m., the final and biggest parade of the event, with the celebrations continuing through the evening, ending with fireworks and fires and a huge party that is not to be missed.

Towns around the region also hold celebrations, full details of which are always available from the relevant town halls.