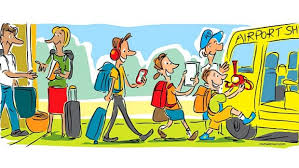 Will it, won’t it, can it, can’t it? The questions surrounding Brexit are short and sharp, but the answers are long and complicated.

Here, BBC Scotland’s Ellis Horne quizzes travel journalist David Byrne on what might happen to our holiday plans if the UK leaves the EU without a deal.

David: “The plan is for them to change and to be blue.

“These are still valid so you don’t need to get rid of it, but make sure you have six months on your passport from when you arrive.”

UK travel documents will no longer be required to have the standard EU burgundy colour, and the government has said all new passports will be issued with a blue cover.

If I’m planning to work in the EU for the summer, and we leave with no deal, can I still go?

David: “At the moment we can work in any EU country – we’ve got right of residence and so it’s pretty easy to do.

“In a no deal Brexit that will change, and I think it will be a situation like working in the US. It will be more difficult, we just don’t know how difficult.”

At the moment, the travel industry can hire workers on a temporary basis but pay their taxes at home, under the EU “posted worker” directive.

Seasonal Businesses in Travel (SBIT) says this seamless transition of staff is crucial to the industry.

If there was a no deal, the posted worker directive would fall away.

If the UK leaves with a deal there will be an implementation period, and during this time UK nationals will have the same rights to work in an EU Member State as at present.

Under this scenario, future arrangements would be determined by the negotiations on the UK-EU future partnership.

Would I still get free EU data roaming in EU countries if we leave with no deal?

David: “The EU, in the last few years, has worked on this legislation to make… your bill like you’re still at home.”

Roaming charges ended in the European Union in June 2017.

If there’s no deal, that wouldn’t be guaranteed any more – so it is possible that roaming charges could return. The UK government has said it would introduce a law to cap charges at £45 a month.

If there is a deal, that would be on hold until the start of 2021 and it would then be up to the networks to decide what to do next.

Would we get Duty Free when travelling to the EU if we leave with no deal?

David: “There will be duty free between the UK and the EU countries – I think that’s pretty likely especially with a no deal situation.”

Duty-free shopping within the EU came to an end in 1999, but it could make a comeback if there is a no deal.

There will be no immediate return of duty-free sales if the UK leaves with a deal because, under the arrangement, customs rules will continue to apply during the transition period.

After that period, duty-free sales could return as part of a future trade deal with the EU.