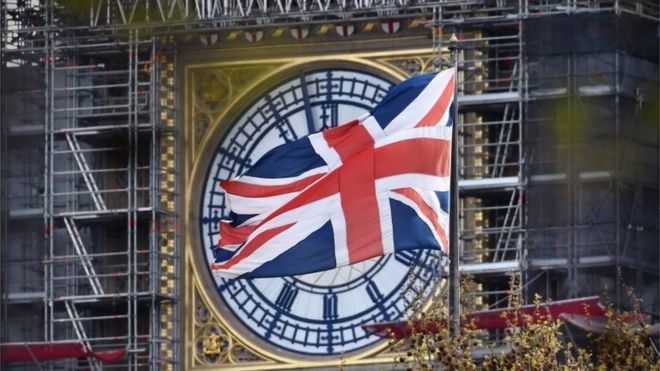 MPs have concluded the first of three days scrutinising legislation that will implement the UK’s Brexit deal.

The government, which has a commanding Commons majority, easily defeated three opposition amendments to the Withdrawal Agreement Bill on citizens’ rights.

Brexit Secretary Steve Barclay said the bill would deliver on the “overwhelming mandate” his party was given to take the UK out of the EU on 31 January.

MPs overwhelmingly backed the bill at its first stage in late December.

It is expected to comfortably pass its remaining stages in the Commons by Thursday before moving to the Lords.

The bill covers “divorce” payments to the EU, citizens’ rights, customs arrangements for Northern Ireland and the proposed 11-month transition period lasting from 1 February to 31 December.

Theresa May – Mr Johnson’s predecessor in Downing Street – repeatedly failed to get her Brexit agreement passed by MPs which led to her resignation as prime minister.

But before Parliament closed for the Christmas recess, MPs gave initial approval to Mr Johnson’s bill by 358 votes to 234.

What were MPs debating?

The bill has now moved on to the second phase of the parliamentary process – known as the committee stage. It will be analysed in detail over the next three days with MPs proposing amendments.

But with the government enjoying a Commons majority of 80, it will not be changed in any way without the support of ministers.

Tuesday’s proceedings began with a discussion of the 11-month transition period after 31 January, in which the UK will cease to be an EU member but will continue to follow its rules and contribute to its budget.

The purpose of the transition period is to give time for the UK and EU to negotiate their future relationship.

The UK has said this can be done by the end of 2020 and the bill rules out extending the transition period beyond that point – even if a free trade deal with the EU has not been agreed.

Green Party MP Caroline Lucas asked Mr Barclay why he wanted to “tie the government’s hands” on the length of the transition period and “risk the disaster of no-deal” at the end of the year.

She suggested the government was “prepared to throw away” constructive negotiations with the EU if they “can’t fit into the arbitrarily short time” set out in the bill.

“Why does he think it’s worth taking that risk?” she asked.

In response, Mr Barclay said it was odd that Ms Lucas, who opposes Brexit, was “complaining about” a measure which would maintain the UK’s existing relationship with the EU for almost another year.

He said Mrs May’s Brexit deal allowed for an implementation period of 21 months which was seen as “exceptionally ambitious”, adding: “But now, in fact, we find that it can all be done in 11 months.”

Mr Carmichael said there had been “bold and ambitious assertions” from the government that the time available would be enough, but Mr Barclay’s words would “come back to haunt him” if they turned out to be wrong.

Shadow Brexit minister Paul Blomfield said Labour accepted their opponents’ decisive election victory had changed the political landscape but still believed this was a “bad deal” for the UK and urged the government to proceed “with caution”.

“We accept we are leaving the EU in three weeks’ time, end of,” he said. “But that is not the end of Brexit.”

MPs also debated citizens’ rights, with Labour, the SNP and the Lib Dems all having submitted amendments seeking to guarantee the rights of the three million or so EU nationals resident in the UK.

Labour’s amendment, which aimed to provide the right of permanent residence to all EU citizens who are resident in the UK before exit day, was defeated by 342 votes to 252 votes.

A Liberal Democrat effort to establish a right to appeal settled status decisions was defeated by 343 votes to 251 votes, as was a similar amendment tabled by the SNP.

An amendment from Conservative backbenchers requiring Big Ben to chime at 23:00 GMT on 31 January – the moment the UK is set to leave the EU – was not selected and will therefore not be debated by MPs.

Acting Chairman of Ways and Means Sir Roger Gale also decided not to select a DUP amendment seeking to scrap the Northern Ireland protocol – which replaced the Irish backstop plan.

On Wednesday, MPs will look at parliamentary oversight and issues relating to Northern Ireland.

The DUP, SDLP and Alliance have jointly suggested amendments to ensure a legal guarantee that Northern Ireland businesses will have “unfettered access” to the rest of the UK.

The SDLP and Alliance oppose Brexit, while the DUP says the deal would undermine Northern Ireland’s place in the UK.