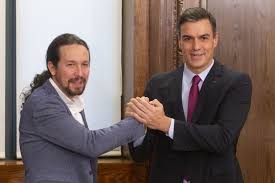 The new coalition government will include five members from the left-wing, anti-austerity Podemos party and three of its four deputy prime ministers will be women.

Podemos leader Pablo Iglesias will be the deputy prime minister in charge of social rights and sustainable development.

His fellow party heavyweight, and wife, Irene Montero becomes the minister of equality.

Also from Podemos, Yolanda Díaz will be minister of employment; Alberto Garzón, Health minister and Manuel Castells, minister of universities.

The other three deputy prime ministers will be women from Sánchez´s PSOE Socialists.

Carmen Calvo will keep her position as Sánchez´s No. 2, Nadia Calviño, until now the economy minister, becomes deputy prime minister in charge of economic issues and the country´s digital transformation.

Maria Jesus Montero has been reappointed as budget minister, the remaining Cabinet posts are also expected to be filled from the PSOE ranks and will be announced in coming days