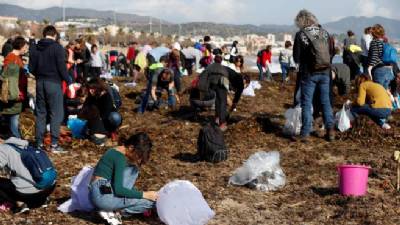 Hundreds of volunteers all along the Mediterranean coast have been flocking to their nearest beach to help clean up the mess left by Hurricane Gloria.

Local helpers in Catalunya and in Alicante province, have amassed tonnes of plastic and other waste which was washed up by giant waves, torrential rain and winds of up to 115 kilometres per hour.

In Catalunya alone, around 500 coastal towns have suffered damage and, although work has already started in earnest on their repair, some will take months to resolve, such as coastal railway lines in Barcelona province.