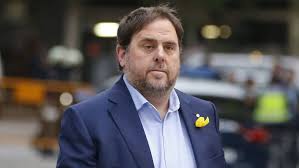 Jailed Catalan politician Oriol Junqueras was released from prison yesterday morning so that he could teach at the Vic University in Manresa, Barcelona province.

The leader of the Catalan Republican Left (ERC) party is currently serving a 13-year sentence for his role in the 2017 independence drive in the northeastern Spanish region.

Junqueras was given the prison sentence last year by the Supreme Court but on Thursday, received notification that Penitentiary Regulations were being applied, allowing him to leave jail to work.