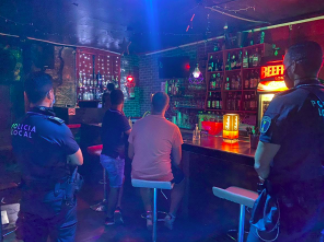 Two pubs have been ordered to close by Policía Local in Alicante city after they were caught still open past permitted opening times.

Alicante has deployed a special police unit to police new coronavirus restrictions, including last week’s nationwide rules for bars and clubs to shut at 1am and no allow any new customers after midnight.

Police have powers to fine bars according to the severity of the infraction – between €601 – 60,000 – as well as temporarily closing them down.

One of closed pubs is in Alicante’s old town, while the other is a chiringuito beachbar on the Almadraba beach.

“The closing down of hospitality establishments, restaurants and nightclubs at 1am is meaning however that certain groups of youngsters start a ‘botellón’ [binge drinking], especially on the beaches, that means our agents have to be on alert as bars start to shut.

“We thank citizen collaboration in the form of denuncias that provide evidence of inadequate conducts, such as the groups of youngsters drinking alcohol on public streets and beaches.

“In these difficult times we need a sense of responsibility to maintain the measures of protection to limit coronavirus infections and avoid new outbreaks.”

The unit announced that, in the early hours of this morning, they fined five people for drinking in the street, six people for not wearing a mask and two people for smoking within a 2m distance of one another.

It comes after a town in Albacete has been put back into lockdown – closing all bars – following a spike related to a stag night in Altea.