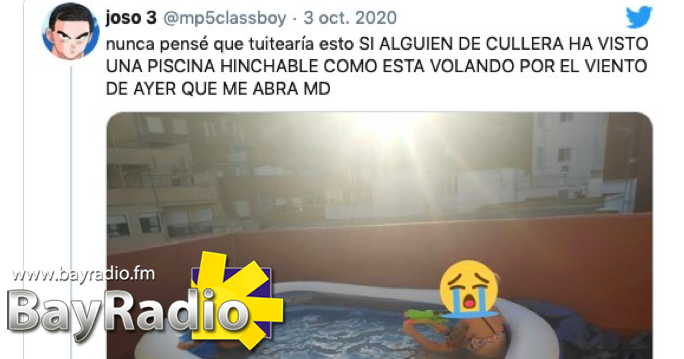 Storm Alex has made history this October in Alicante – not for its floods or fallen trees, but for carrying a paddling pool some 140km.

A desperate Tweet from a user in Cullera, Valencia, went viral last Saturday as ‘Joso 3’ asked neighbours to look out for a blue-grey paddling pool.

The news has already made local news papers.

Joso 3 said: “I can’t verify 100% if the paddling pool is mine, because it’s absolutely wrecked, but this is amazing HAHAHAHA.”

Most municipalities in the interior of Valencia and Castellón provinces were on orange warning from 10am on Friday until midnight, as well as Alicante’s Marina Alta.

Spain’s Met Office (AEMET) up to 95 km/h were recorded in Fredes, Castellón.