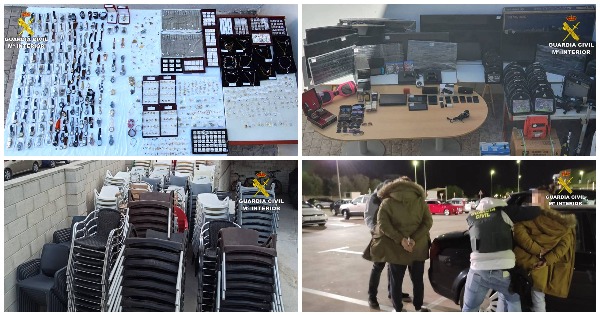 Guardia Civil have arrested five professional criminals who robbed homes and businesses in the Marina Alta with intention to send stolen goods to Mali, Africa.

It was a crime-spree that could become a Netflix series.

No sooner had lockdown restrictions been removed back in the summer, a team of five set about robbing everything from watches in second homes to restaurant terrace furniture in the Marina Alta region of Alicante.

A list of 95 charges against the five suspects includes:

The police operation began in June after Guardia Civil agents in Moraira and Benissa recorded a rise in petty theft and burglaries – it’s worth remembering Spain exited lockdown on 20th June.

The five criminals involved began breaking into second homes at all hours of the day – the thieves took their shoes off to not wake sleeping owners, reports La Marina Plaza.

The gang took objects they could make a quick sale on: jewellery, watches, cash, bank cards and electronic equipment.

Bank cards were maxed out immediately, before owners realised the scam and blocked their accounts.

Police traced the crimes back to a Valencian family in Ribarroja, who used a network of vehicles to rob homes in: Teulada, Moraira, Benissa, Calp, Benitatxell, Denia, Javea, Gandia, Cullera, Sueca, Tavernes, Aldaia and even up to Castellón.

The two main Spanish nationals behind the robberies are a couple aged 27 and 25, according to Guardia Civil.

The couple used a network to sell the fruit of their crimes – police caught one of those arrested in Aldaia loading a shipping container full of restaurant terrace furniture and electronic equipment for shipment to Mali.

Police found a total of 105 shipping containers and 60 lorry containers ready for shipping at the site.

The illegal items in Aldaia included:

The estimated cost of the stolen goods has been estimated at €1 million.

The 27-year-old man has been sent to prison without bail as authorities considered him the ring leader.

The four remaining suspects have been released on bail, pending trial.