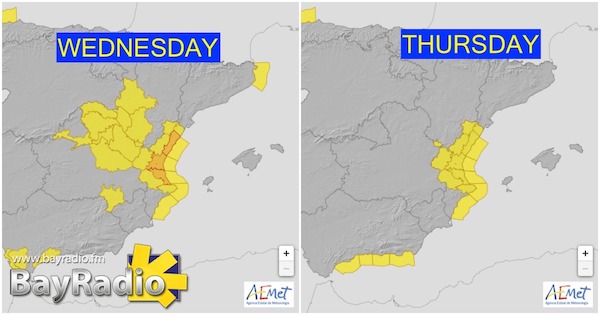 Spain’s met. office (AEMET) has warned the Valencian Community will be ‘especially’ hit by storms this week.

AEMET has put parts of the Valencian Community, Castilla-La Mancha, Andalucía, Madrid and north-western Galicia on weather warnings from Tuesday-Thursday in anticipation of storms.

The Valencian Community has been singled out, however, for particularly intense rainfall.

Spain’s met agency has written a detailed report (link in Spanish here) – or read the most important part in translation below:

“On Wednesday, rainfall will decrease in Cataluña, with locally-strong or persistent rain and storms in central Spain, parts of the south, especially in southern Andalucía, and throughout the day on the eastern Mediterranean area, especially in the Valencian Community. “

A post from Alicante’s climate also named the Marina Alta as a region due to be hit by heavy rainfall.

AEMET issue alerts in increasing severity from yellow to orange to red.

The entire coastline of Valencia province (inc. Oliva, Gandia, Valencia) has been been put on an orange warning.

An explanation of the warning says rainfall of 100mm over a 12-hour period is expected, with 40-70% probability.

The warning is in place for the whole 24 hours of Wednesday.

The Marina Alta region in the north of Alicante province is on yellow alert, according to AEMET, with rains of 60mm expected.

A full list of regions in the Valencian Community and their warnings can be viewed here in a list published by AEMET.