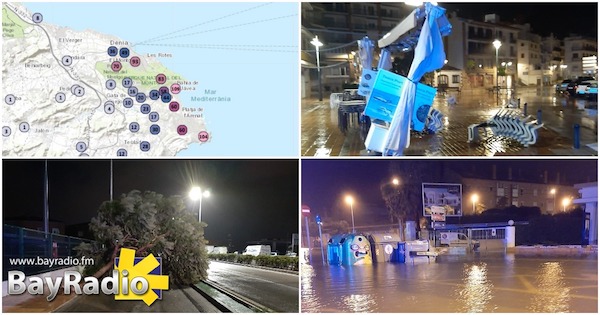 Javea has been hit by an electric storm that saw roads closed around the Arenal beach, as over 200litres/m² of rain fell across the municipality since last since night.

From 00:00 to the time of writing today, more than 100litres/m² of rain has been recorded in the port area and up on the Cap de la Nau (see below).

The Ayuntamiento confirmed over 200litres/m² had fallen over the last 24 hours (see below).

A press release added that trees, awnings and walls have fallen.

Local weather watching page MeteoXabia also announced it had shut off a few of its stations due to lightning storms.

It comes as the Marina Alta region has been upgraded to an orange weather alert, in expectation 100litres/m² over 12-hour periods throughout today.

Weather watching app Windy is predicting between 20-30litres/m² of rain will fall in the Marina Alta region in the next 12 hours.