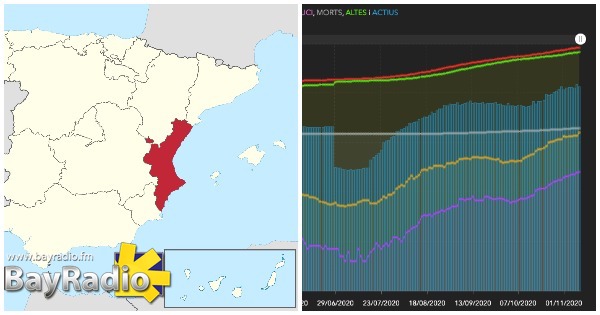 The Valencian Community should be on maximum health alert according to Spain’s four-tier system – but no corresponding measures have been announced yet.

This pushes the region (Alicante, Valencia and Castellón) into the maximum ‘extremo‘ alert, according to Spain’s four-tier system.

So far, the Valencian government has not announced any new restrictions since the update last Friday. Read about those new measures here.

Occupied beds are up from 194 last week.

According to one of the Valencian region’s leading syndicate (CSIF), the UCIs at Vinarós, La Plana, Elda, General de Alicante, Orihuela, Torrevieja and Vinalopó are reaching ‘saturation’.

It also comes as the Valencian health department Sanitat announced 26 deaths over a 24-hour period yesterday – the highest figure since 16th April’s 43 deaths.

This AI over 7 days is the 2nd-lowest in all of Spain’s 17 autonomous communities. Only Canarias is lower, with 45 cases per 100,000 inhabitants.

Only five regions have a lower occupancy of UCI beds than the Valencian Community – the lowest being Canarias, with 10%, and the highest La Rioja with 57%.